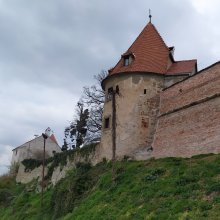 As it was Czech Republic two years ago and Poland was last autumn, this year had also been waiting for me with a new adventure in a new country. Somehow I had known for a long time that my path would eventually cross Slovenia sometime in the future.

Firstly, I had already lived in Mediterranean countries before, then in Slavic ones, and this country, as a matter of fact, blends both features. It is also just next to my home, Hungary, not to mention the fact that Slovenia is a sort of dreamland for hikers and history lovers, and I am a devoted member of both these categories. 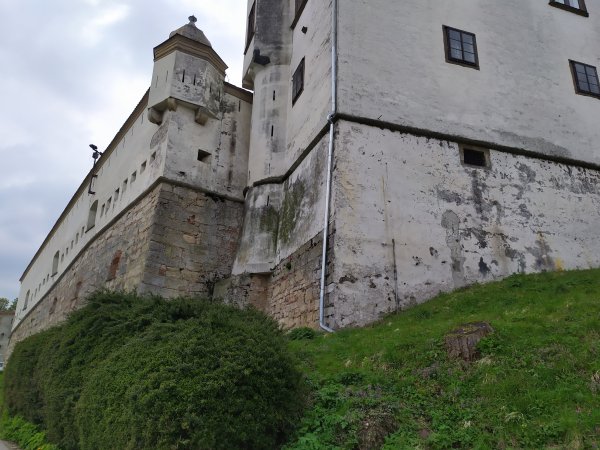 Now it is ironic to start thinking in my Slovenian flat that when I was travelling to Croatia for the first time, we stopped in places like Ljubljana or Maribor, while I was just wondering from my seat in the train how this country could be like, if it was really something I had heard about from others and read about in some articles. There were some interesting signs or coincidences even in Katowice, where the Consulate of Slovenia was actually in the same street where I used to live.

Maybe it is wrong to find any mysterious encounters and project them back to the past, because we are also responsible for our own decisions and journeys - yet I felt that choosing this country was somehow coming towards me and I have always been looking for the magic in such fresh beginnings. 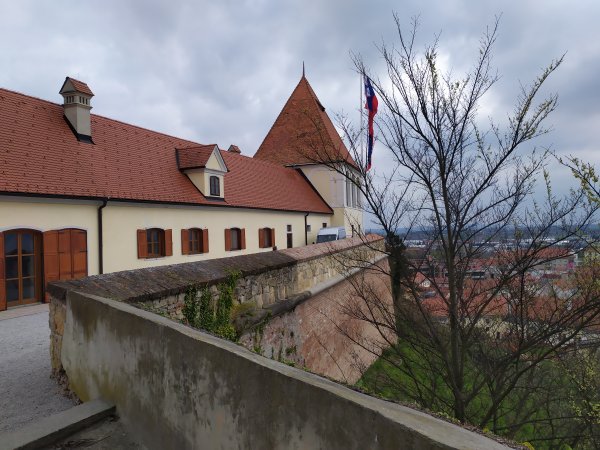 Most of the things I remembered about the country were very basic, maybe even stereotypical or cliche data, although they are all true. It is often mentioned that Slovenia was the country that could gain its independence very quickly and could leave the Yugoslav past behind without any serious wars or losses, and later it became one of the most developed states of the region, and also a leading economy of the Western-Balkans. 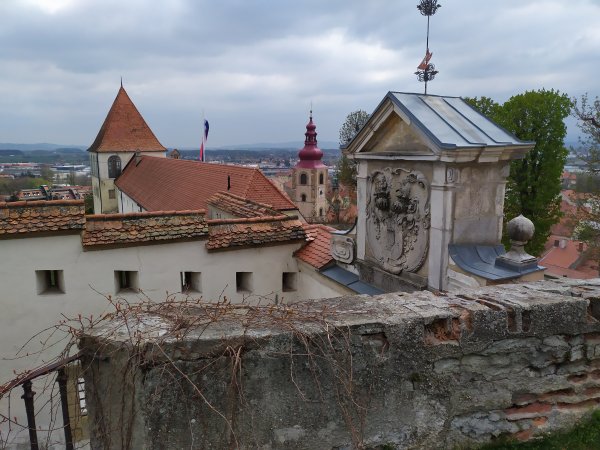 It is usually called the ‘Switzerland of the East’, which refers to the fact that it is peaceful, advanced, wealthy, and even the landscape is similar to the Alpine country due to the mountains, lakes, fields, while it even has a seaside. In general you do not hear about any huge domestic or international troubles Slovenia faces, so there are many reasons why it is very attractive to tourists, such as its genuinity, hospitality and magnetic beauty. 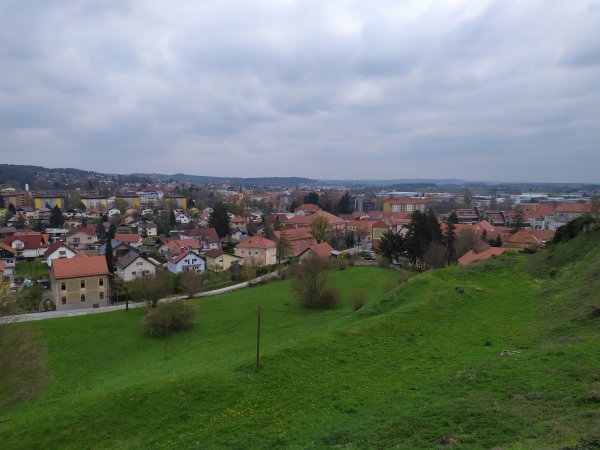 The information I had gathered before the trip also confirmed that maybe it would not be only a fairy tale that the country indeed looks like how it is usually described in the books and documentaries, and I already had some destinations on my wishlist. However, to be honest, I did not dare to expect two things that eventually happened.

First, I had a chance to visit three very important cities within a short period of time, which means that I might have an opportunity to see a lot in six months, and the second is: yes, so far this place completely looks like how it is written and said regarding tidiness, organization, development and the kindness of the locals. 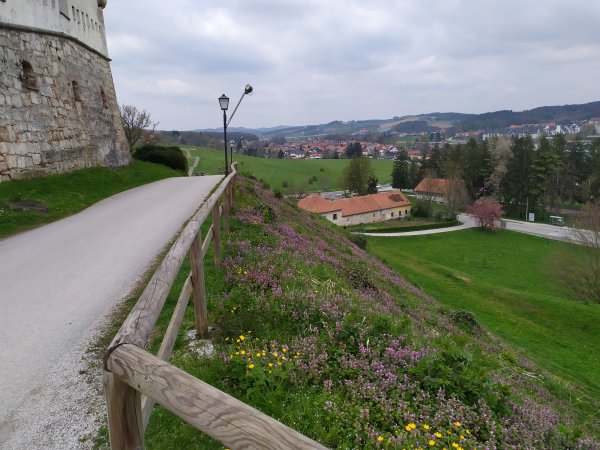 Slovenia really tries everything to become a popular and well-known island on the touristic map of Europe, and it has all the skills and abilities to fulfil this plan. Apart from the clean and intact habitations of nature and the cozy and elegant city centres I have seen up to now, it is important to mention that the people are totally helpful and friendly towards foreigners. Even if they do not speak languages, they really want to give you the necessary information and do not get scared or unnice if you have any questions. 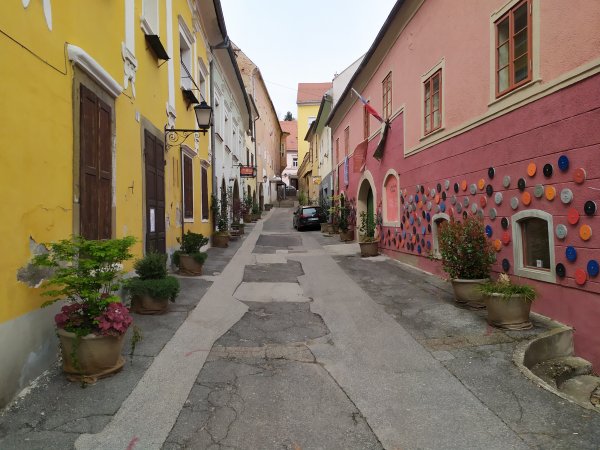 What is more, there have already been two particular cases, that showed me that being kind is not only pretending and surficial, but it comes directly from the heart of people. Once, when it turned out that we were supposed to measure vegetables on the shop scale and did not know about that, the shopping assistant gave our goods to her colleague to do it instead of us, so finally we could buy them. No one got mad or impatient due to our mistake at all, and it was something new to me.

The other story happened, when we just missed the bus that was leaving in front of our eyes, and although we were not even in the bus stop yet, the driver, who noticed us, stopped in the middle of the road to let us enter, which is exactly the sort of kindness I had not experienced since some travelling episodes I had in Italy and Greece. 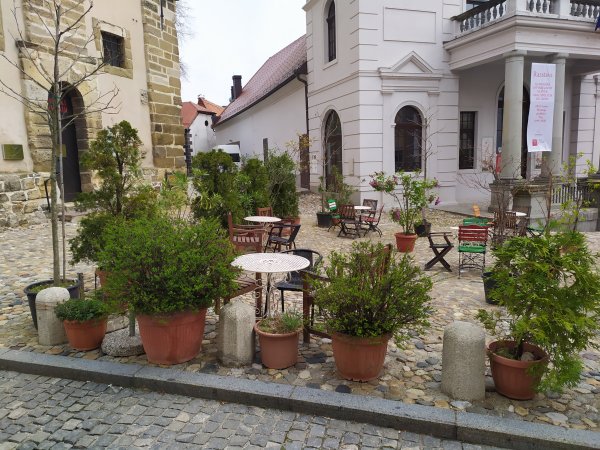 I should also talk about the culture a little bit. Slovenia has always been fascinating to me, because it had a lot of cultural inputs and influences in the past, therefore it has a very rich heritage. This means that it includes elements of Austrian, Italian, Turkish, Croatian and even Hungarian culture, while it also has its own characteristics in this cultural mixture, which is visible in the architecture, language, holidays, mentality and gastronomy.

For instance we can mention popular fast food such as čevap, the local version of gyros and kebab, which can be found all around the Balkans; then there is an oil made of pumpkin seeds coming from Styria (Austria), and many bakery products that are popular in Central- and Eastern Europe as well. 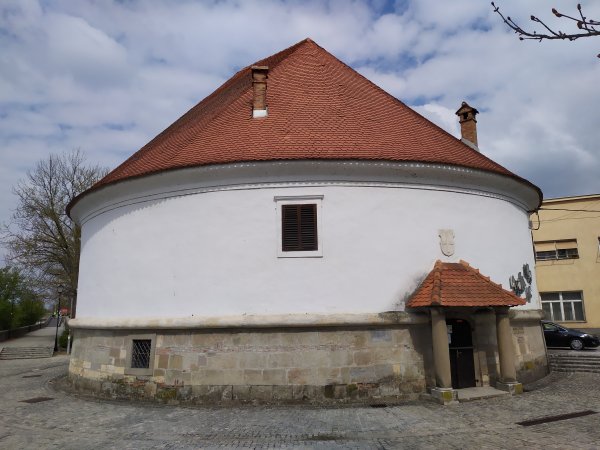 Of course there is a strong cultural connection to the other former Yugoslav states - the main differences can be detected rather in the different religion, historical development and national spirit, if I may use this term. Due to the fact that I come from a country of the same region and I have visited many others that were similar to Slovenia, I always have the impression since I am here that I already know these lands, because this country is a little bit of everything and it seems so familiar to me.

However, this is just the surface, because the yet-unknown myths, stories and experiences created from this diversity form something new, vivid and unmistakable all together. 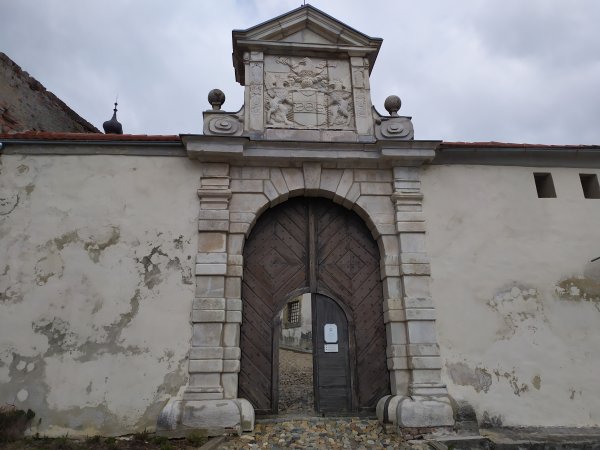 Last, but not least for this introduction, I would like to make a note that maybe it is not necessary to learn Slovene since many of them speak English, German or Italian, but it can be a very special language course, especially, if someone is already familiar with Slavic tongues.

I could immediately catch many words due to my Czech and Croatian trips, and I already knew phrases like hvala (thank you), dober dan (good day, general greeting), dobro jutro (good morning), dober večer (good evening), da (yes) and ne (no). I also met some new 'friends' that are not always easy to pronounce, such as vrt (garden), vrh (peak) trg (market, square) and trgovina, which means shop (usually for groceries) or trade, so it logically comes from the word for market. 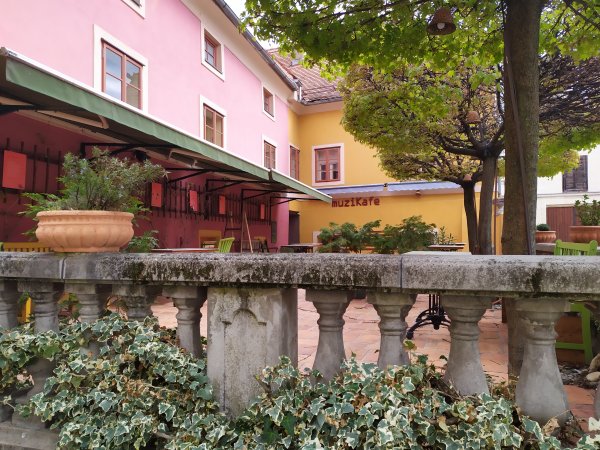 My first stop was Ptuj (in Hungarian Potoly, as it turned out), which is a lovely town of 20, 000 inhabitants in the Eastern part of the country. The most interesting fact about the place is that it is the oldest settlement of Slovenia, because the ancient Romans established a colony here called Poetovio, the ancestor of Ptuj, that was a castrum (fortress) in the province of Pannonia.

Taking into account how far I travelled from home and that I was in a foreign country, it was strange to think about that the colony which used to be here was the part of the same province within the Empire as Gardellaca, which is a similar Roman fortress next to my village, Tokod in Hungary. 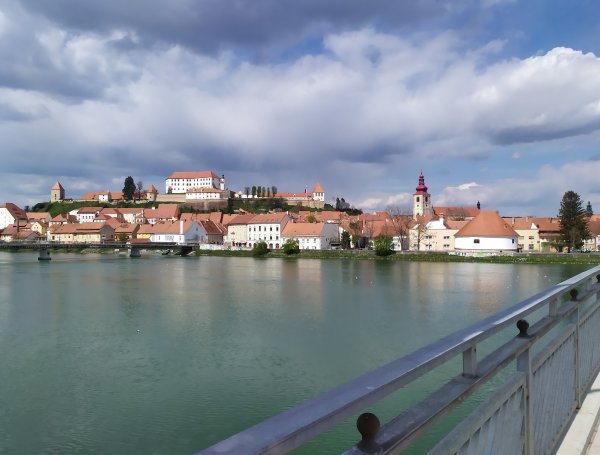 Although Ptuj is considered as a town, I would rather call it as a city, since it is the eighth largest settlement of Slovenia, and it basically provides almost everything that cities usually do: shops, restaurants, offices, shopping malls, cultural centres and so on, not to mention the frequent traffic of the city. However, by walking just in the middle of the old town, these noises immediately disappear - the hustle and bustle that remains is only related to the sounds and laughters of bars, coffee shops, wine cellars and terraces. 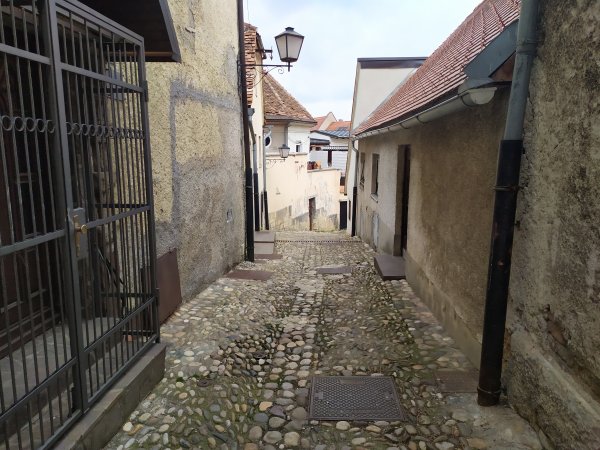 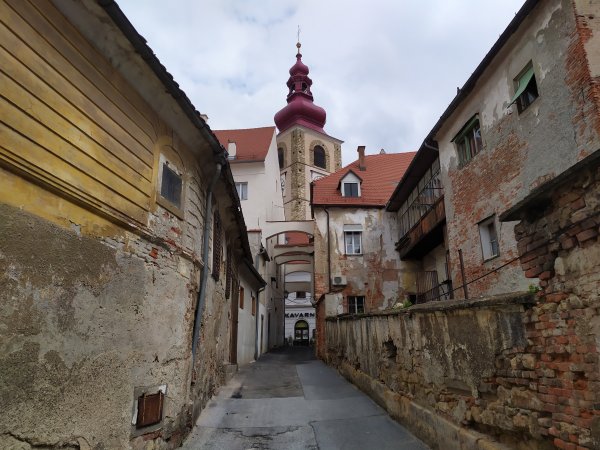 Even though we are in the continental part of the country, it is already possible to see the influence of Mediterranean architecture, and the old buildings, narrow streets and roofs I could see reminded me of the vibes of Terranova da Sibari, Korfu and Vrbnik from my past trips. I could also see the classical, baroque and eclectic ornaments of the Monarchy (Austria-Hungary) on the local architecture - that is why I was not surprised when a lot of people who saw my photos found similarities with Western-Hungarian cities like Győr or Sopron. 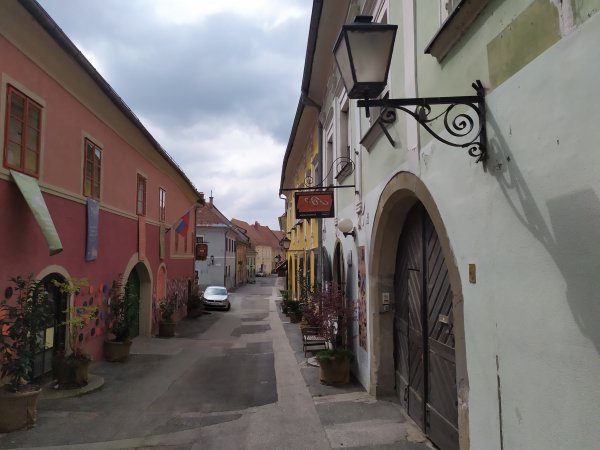 The biggest jewelries of Ptuj include the decorative Town's Hall and St. George’s Church with its wonderful bell tower, which seemed to be an iconic symbol of the city to me. It is located next to the theater on Slovenski trg (Slovenian Square), which is the end of Prešernova, an important and great street (ulica) of the old town to look around and admire some of the amazing shop signs and facades. 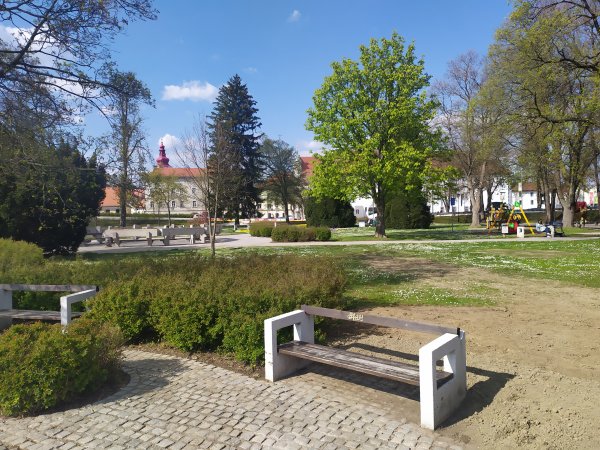 Another beautiful clerical construction is the Minorite Church close to river Drave (Drava), that belongs to a monastery which is open as well. By the way, if you are already at the riverside, spend some time among the harmonic and colorful flowers of the city park which is also here. It is a perfect place to find peace and enjoy the view, but if you need more silence, just go ahead along the river, watch the seagulls and the distant curves of the incredibly blue mountains. 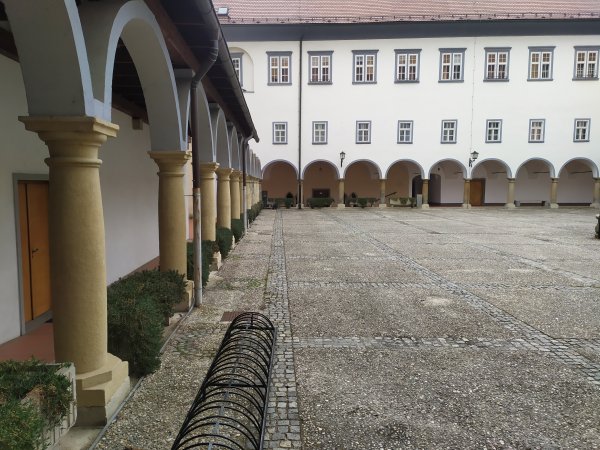 You do not have to be an inborn attention to find the castle, because if you are close to Drava, one of the first things you will see is surely that with its white walls and honorable shapes, guarding the whole area from the top. Although the centre itself already makes you feel in the middle ages, the castle is the monument that leaves no doubt that we are participating in a medieval time travel in Ptuj. 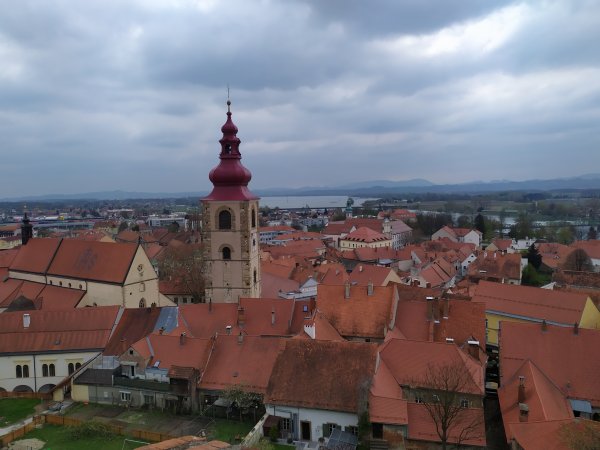 The most breathtaking panorama and photo-shooting spots obviously show up if someone arrives in the yard, but it is also worth entering the museum or just getting lost in the miraculous centuries the place summons for us. Ptuj is not necessarily one of the most crowded or best-known cities in Slovenia, but it catches and represents a lot of the special image of this country. And that makes it unmissable.