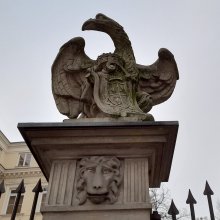 I mentioned in my last article that apart from my small trips in Silesia, I also experienced a great and unexpected surprise: namely, that I finally had a chance to visit Warsaw, the capital of Poland, where I had wanted to go for such a long time! Although I knew that I did not have a lot of time, and also the fact that sightseeing was not going to be the same in the winter as usual, I tried to use my best skills to meet as many things as possible during this one weekend. I was sure that I would still have an opportunity to return later if I liked the city, so instead of experiencing the whole of Warsaw, at least I wanted to build up the map of my kind of Warsaw in my mind. 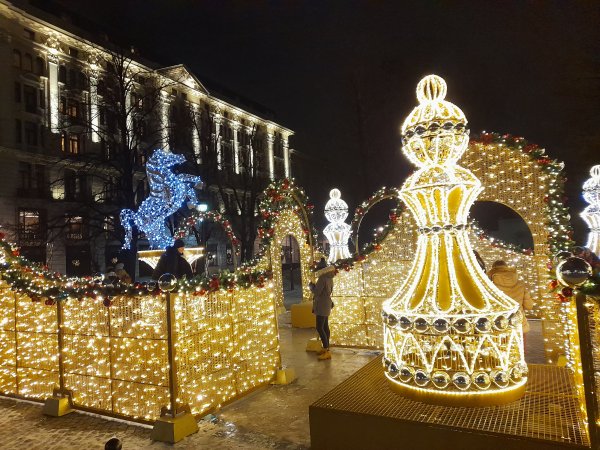 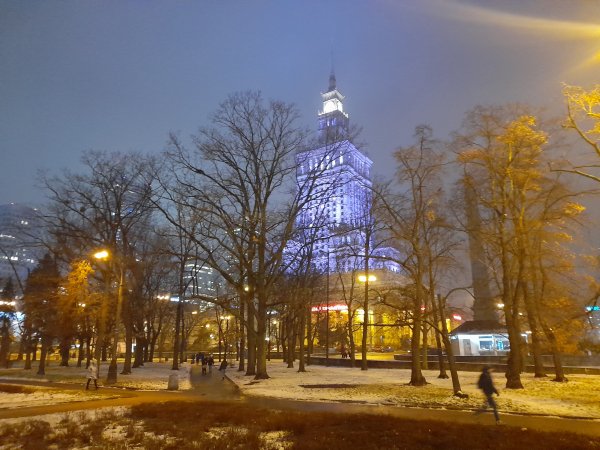 Of course, it might not be about everything, but I think even the very middle of the centre let me into this magical, new world, which I could not really compare to other European cities. Okay, maybe to Ljubljana a little bit, but it is still a recent experience so I might be influenced.

The vivid life, the tall, skyscraper-like towers and the architecture of some huge office buildings reminded me a bit to New York, especially the modern part of the city close to Warszawa Centralna with the evening view of the amazing Palace of Culture and Science (Pałac Kultury i Nauki). 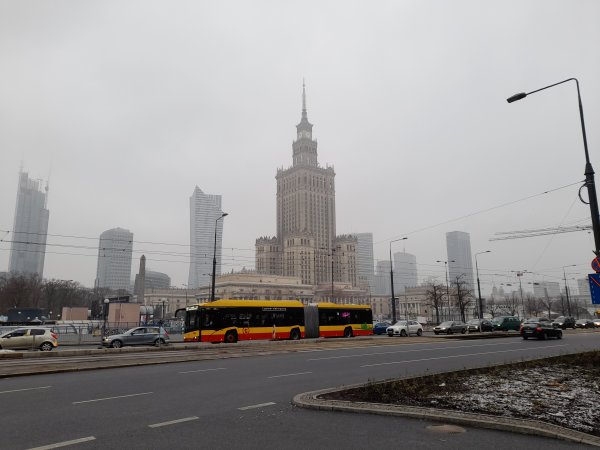 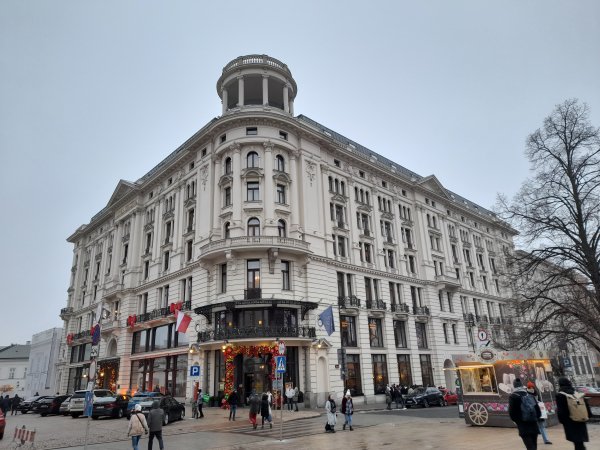 However, all my other associations failed, and this time I had to admit that Warsaw had its unique vibes so much, that nothing else was really alike what I had seen before. It was as much Eastern-European as Western, and as much Northern as Southern, and although it was almost completely demolished in the Second World War (and then rebuilt), it could keep its historical spirit that made it worthy to be the unstoppable heart of the Republic, or, as the Poles call it: the Rzeczpospolita. 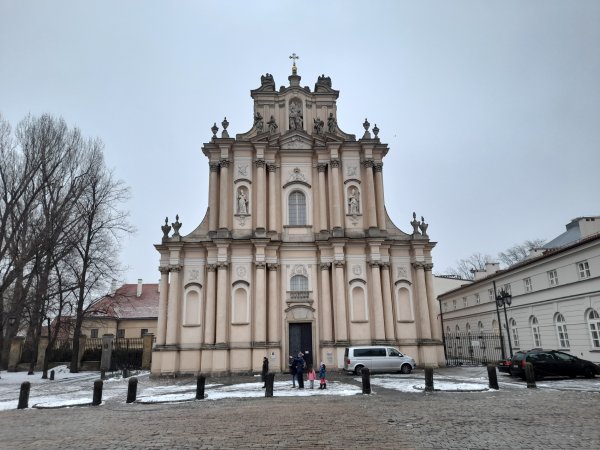 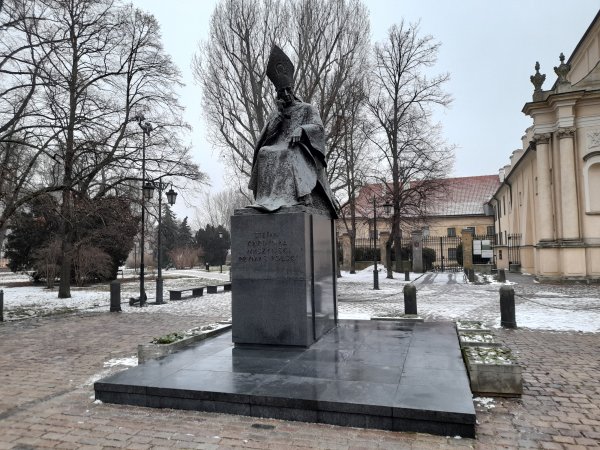 In administrative and cultural terms, Warsaw is also the centre of Mazovia (or Mazowia), which is not just one of the voivodeships, but also one of the three most important historical territories with Lesser-Poland (Małopolska), the region of Kraków and Greater-Poland (Wielkapolska) the region of Poznań.

Regarding the traumatic destructions and post-war reconstructions, it is also very ironic, as my Polish girl came up with this idea, that the English name of Warszawa, so Warsaw accidently refers to the tough history of the capital. War-saw: a city, that saw the war. 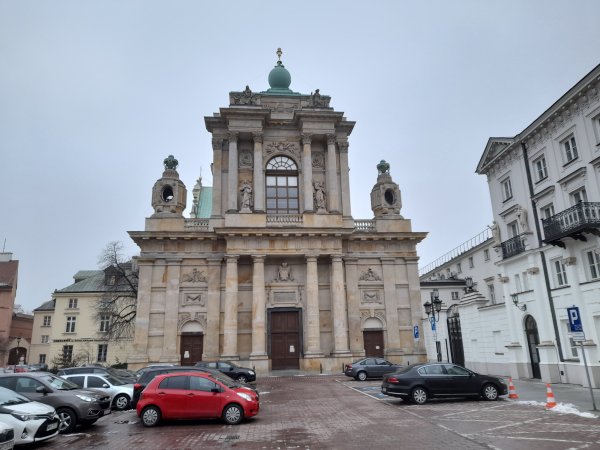 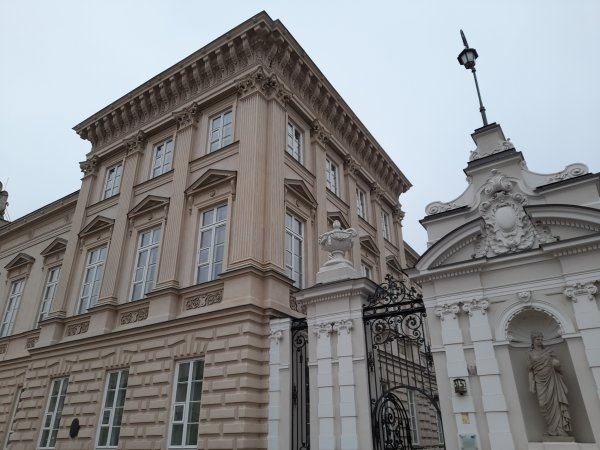 The myth says that the city’s name comes from the name of a prince or fisherman called Wars, who fell in love with a mermaid, Sawa and rescued her from the evil. The Polish word for Warsaw, Warszawa is a combination of the name of the lovers, who later settled down along Vistula and established the glamorous city we know today.

Sawa, who is also referred to as Syrenka ('Little Siren'), became the symbol of the capital, who can be found in the coat-of-arms, traditionally with a shield and a sword to protect the place from the enemy, but she also got her famous statue in the old town. 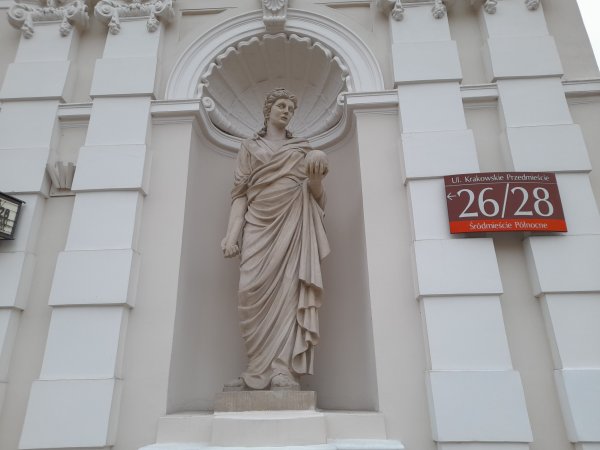 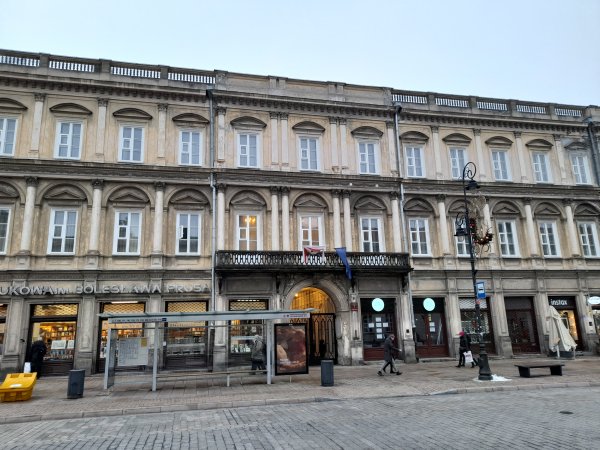 Unfortunately, I had totally forgotten about this last sight and missed it, just as I did not manage to find the Basilisk of Warsaw: the legendary monster who is most probably not as famous as the Wawel dragon of Kraków, but also got a nice monument, and a story with a reckless hero who kills the beast with mirrors, and thus by its own deadly reflection. 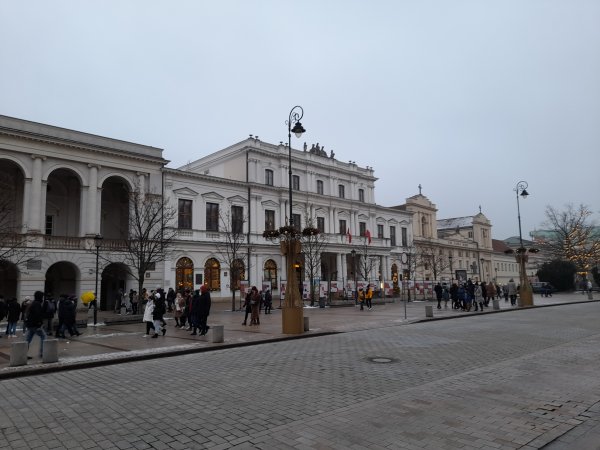 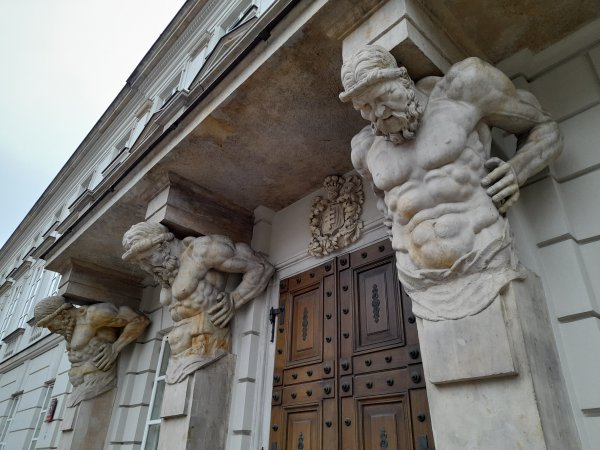 Leaving behind the mythology, Warsaw can also ring a bell due to the Warsaw Pact that was signed and established here, although it already had a long acquaintance with Russians even before the Soviet Union. When Poland was divided three times (!) by the end of the 18th century among three great empires, and later on removed from the map completely, the area of Warsaw was given to the Russian Empire.

The fact that the capital was extremely important for the Poles can be shown via an anecdote saying that when the borders of Poland were being rearranged and moved westwards, the local leaders asked Stalin whether they could keep Lviv (Lwów in Polish and Ilyvó in Hungarian), an important city in former Eastern-Poland, which had always been Polish: the Soviet dictator said cynically that they could, but only if they gave up Warsaw, which, according to him had always been Russian in a sense.

The capital was obviously not something to negotiate, so nothing could be done to change the great powers’ decisions after 1945. The Jewish community, the ghetto of Warsaw and its uprising are also well-known: today there are museums dedicated to these upsetting chapters of the city during the last century. 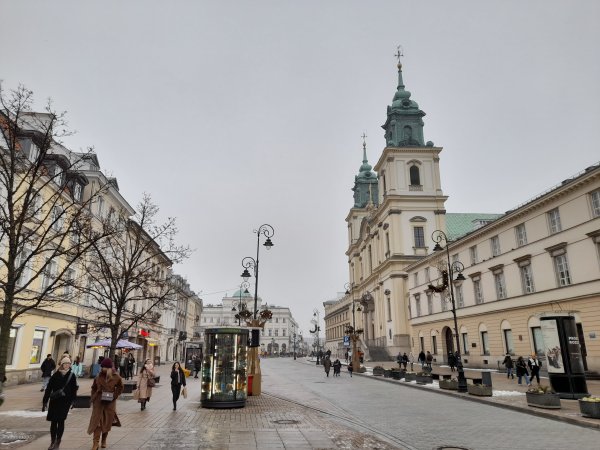 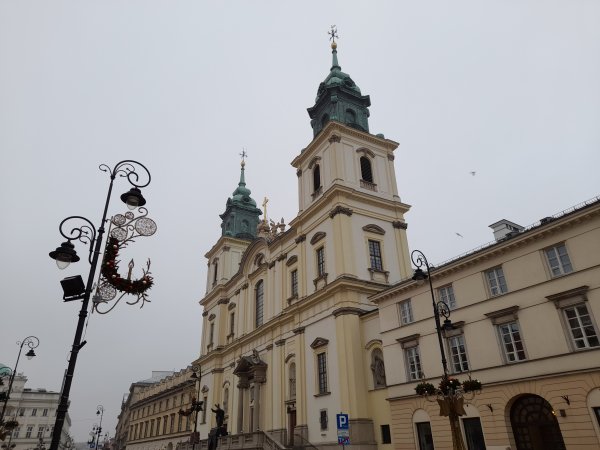 Now, however, I would like to move on and tell you what I personally discovered in Warsaw, which is way beyond what books, photos and illustrations could tell you about it. You know, maybe sightseeing is not the same in winter, but there is one advantage of it, particularly in December; and it is called Christmas market!

I could see many sellers and wonderful Christmas decorations along Krakowskie Przedmieście, which was one of the most remarkable streets and a real axis of the city. The boulevard, which did not have any traffic for this time, but was full of tourists, passes by plenty of palaces, churches, monuments, hotels and cultural institutions, which makes the area a sort of open-air exhibition. 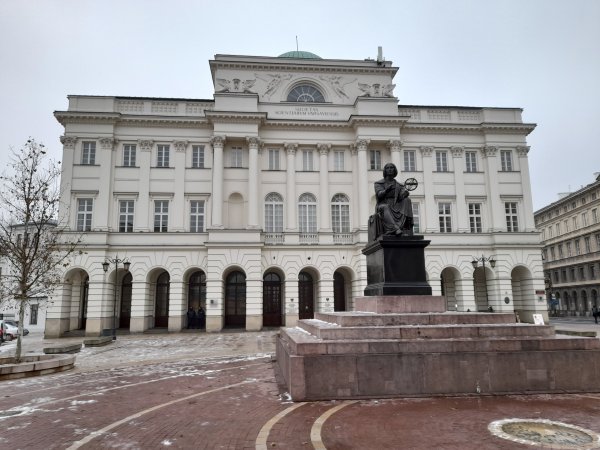 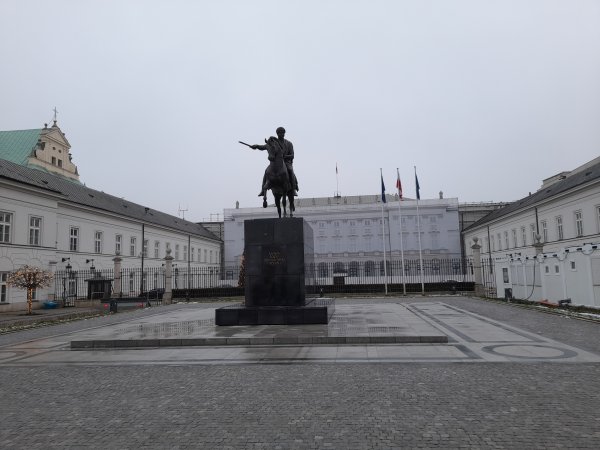 Beginning with the monument of astronomer Copernicus in front of Staszic Palace, there are many fascinating sights, and they impress the wanderer even with their facades, if one cannot enter: such a wonder was the Baroque church of the Holy Cross, the Czetwertyński-Uruski Palace, the Presidential Palace (with the statue of a horseman, general Poniatowski), the monument of poet Adam Miczkiewicz and another one of cardinal Wyszynski, or the building of the Polish Ministry of Culture guarded by some strict and artistic griffins.

I also have to mention some other enchanting sculptures, such as some muse-like ladies standing in dead windows or the atlantes: the male variants of the archtiectural elements called caryatids, that looked so lifelike that one could really believe that they were actually carrying the building on their shoulders. The very best was maybe kept for the end of this long way though, because when I saw Saint Anne’s Church with its neoclassical front side and gorgeous bell tower, I felt that it was a very special encounter. 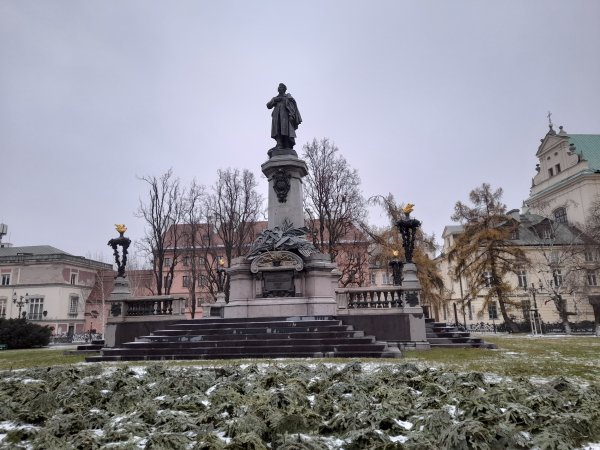 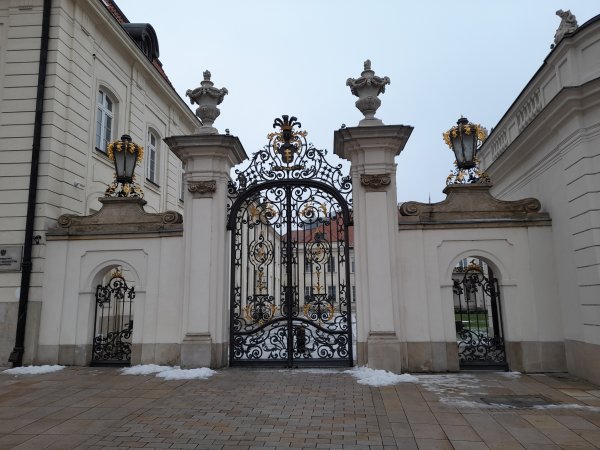 And the miracle was still not finished, since just as I arrived at the Castle Square (Plac Zamkowy) and the exact middle of the old town (Stare Miasto), I recognized the majestic red shape of the Royal Castle, while I could also gaze a mesmerizing view from the top and find some other sights, like Sigismund’s column or Kiliński’s monument: a brave soldier standing with drawn sword, pointing in the air.

However, the Christmas vibes made everything a little bit different, and besides the heavy and complex heritage of history I could also feel the lightness and joy of the holidays. 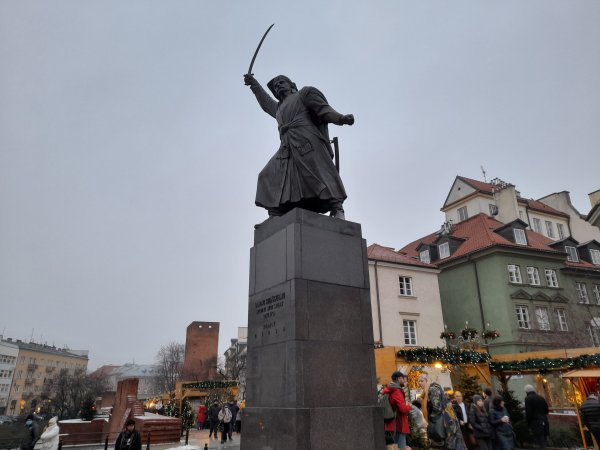 The enormous Christmas tree in the middle of the square, the accordion, violin, sax and guitar players everywhere, and the market stalls proved to be great at creating such an atmosphere, so while I was walking with some red mulled wine (grzane wino) in my hands in the cold sunset, I could explore the area of the castle’s fortificated walls (including Barbakan Warszawski), many nearby stairs, and the garden of the royal palace, which was obviously not very green or diverse in this season, but the peace and the incredibly harmonic statues of the park revealed me the true nature of the place.

Besides many small sights I saw on my way, I must mention the respectable shores of river Vistula (Wisła) that was accompanied by a great corso and a bridge lighted with different colors like red, green, yellow or blue, while the other component was usually white. After the hustle and bustle of the main square, it was an eerie, but very silent and honorable experience to walk along the river and listen to the distant voices of the city. 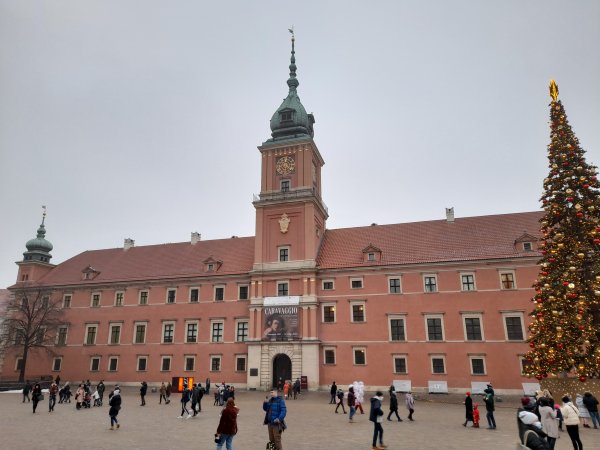 The bridge led to another part of the city called Praga, and the sound of this name is not coincidentally similar to Prague, the Czech capital. Namely, the original, old Slavic word, which is the root of both of these places, meant threshold and it was connected to riversides, which was also a crucial characteristic of Warsaw.

If one goes ahead towards this distinct and checks out the beautifully-decorated curves of the Cathedral of Saint Michael and Saint Florian, they will see that the suburbs in this side of the river is the home for many former industrial sectors and abandoned, interesting factory buildings which invites the explorer for a time travel into the everyday life of the 20th century’s working class in Poland. 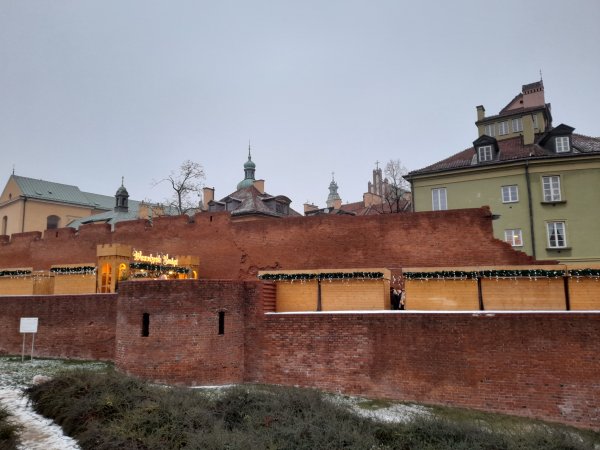 After the historical centre with its cultural and architectural richness; after the cozy pubs, shops, terraces, cafés and food bars one can visit all around the city, our Warsaw trip ends right here. Certainly, I could still have seen many parks, islands, forests or the beaches (plaży) along Vistula, if I had got more time for the nature, which is probably also as amazing as the streets, town houses and palaces I discovered.

The South-Eastern part of Warsaw also hosts some other breathtaking sites, such as John III Sobieski’s palace in Wilanów, the Royal Łazienki Museum or one of the dozens of thematic museums (e.g.: the one of the Polish Army, Archdiocese, Life in the People’s Republic of Poland and so on). 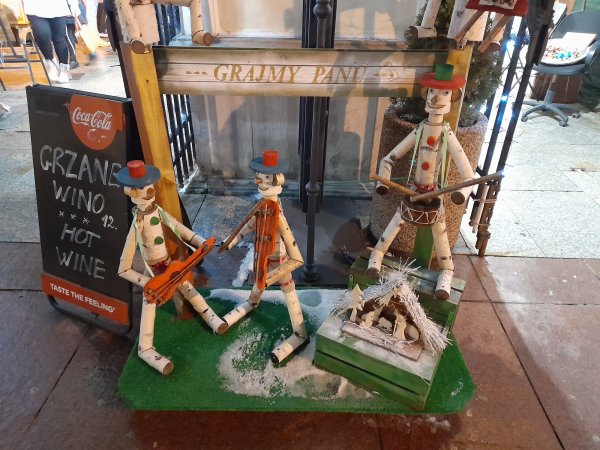 The limited time did not give me a chance to have such deeper discoveries, but to be honest, I did not mind it, because this weekend, especially with the magical spirit of December and the Advent, was a perfect appetizer for me to create the foundations of a brand-new, genuine place in my heart, which is beating together with this memory.

Just like this unbelievable and miraculous city pulsates with its vivid and shining lights, as the modern capital of a fabulous Eastern-Eruopean country.