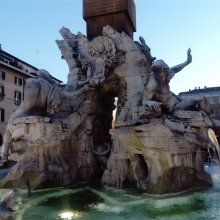 The last string of the violin I would like to introduce is a different memory for me in many terms. While Florence and Venice were both connected to my first stay, the trips to this city were actually not planned but somehow happened by accident. Firstly, it was obvious that after such a long time I would eventually at least cross the capital, but I think it was also a sort of destiny: I had to be there, where so many things began and ended. As the famous saying sums it up, all roads lead to Rome - and to be honest, after everything I could discover, I can just agree with this theory.

Maybe it is not necessary to introduce Rome (Roma), the capital of Italy that bears the title la citta eterna ('the eternal city') among many others and has an outstanding role in the history of Europe and the world.

Founded in 753 BC and named after Latin king Romulus, it is not just one of the oldest cities in the continent, but it had been the centre of ultimate power: first as the capital of the Roman Empire, then as the home of the Papal State. I still remember that apart from historical books and classes, one of my first childhood memories about the city was the catholic phrase saying that ‘the bells had flown to Rome’ during the Easter holidays. 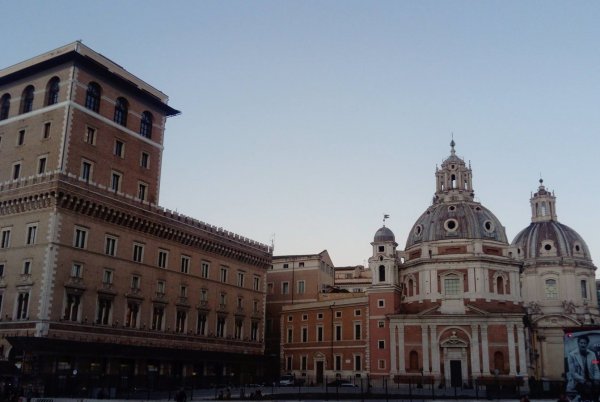 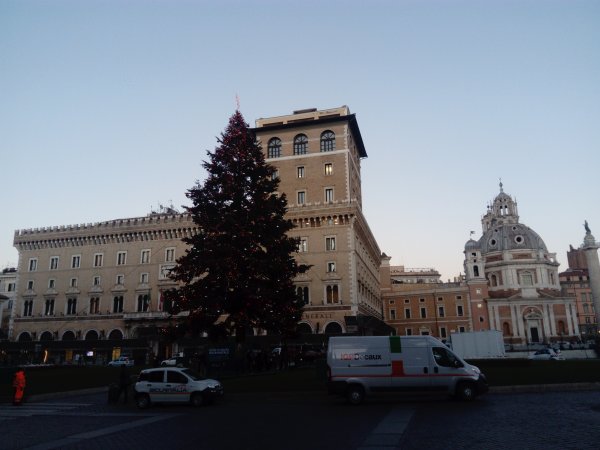 Even though I knew quite a lot of things about the city, I felt it a bit shameful that whether I wanted it or not, Colisseum (Colosseo) was the first picture that came to my mind: the worldwide famous amphitheater of Rome, that was named after the statue of Nero, which was called Colossus.

Of course, the reason was the representation of the city in the pop culture, and somehow I could understand it. Actually, it was very surrealistic to walk around something which was such a well-known symbol in the Earth, especially taking into account that some people treat it as the most natural thing, why others will always know it only by illustrations. 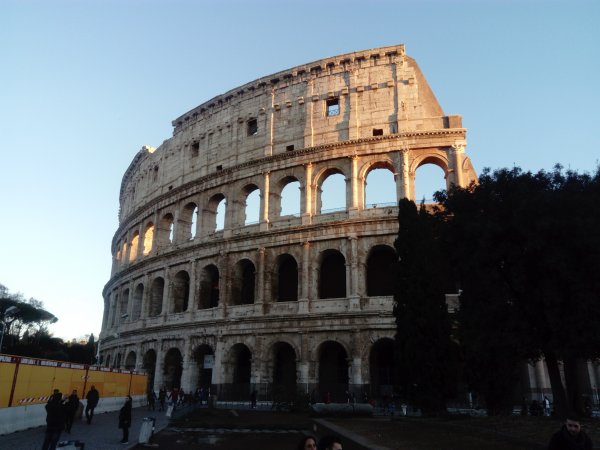 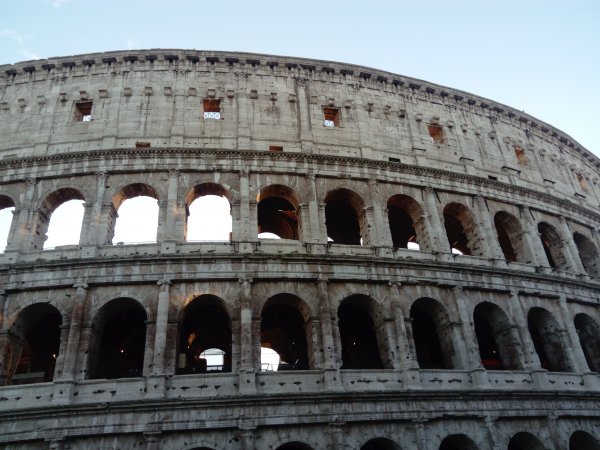 The building that witnessed many gladiator combats, executions, beasts, drama plays and even naval battles is not the most preserved, but the most enormous arena, being bigger than the ones of Verona (Italy as well) and Pula (Croatia).

Although it was treated as a pagan monument, it had such a dignity that no one ever dared to burn it to the ground: a monk from England even wrote about it, that 'Rome would stand as long as Colisseum itself'. Another ancient construction, Circo Massimo (which was used for chariot racings) was not that lucky: I could basically see the empty field in the place of the former track. 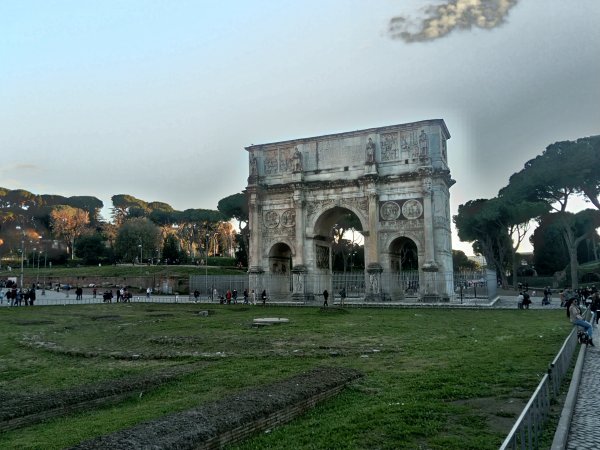 Forum Romanum (Foro Romano), the ancient main square was in a much better condition though: the view that I got by watching the morning sunlight shining across the ruins and columns was unforgettable with every single moment of it. A little bit further the vibes of the modern city begin, thus you can observe buildings like Palazzo Venezia ('Venice Palace'), which is not really alike the architecture of the city of lagoons where I lived in: it just got its name because the embassy of the Republic of Venice used to work there during the papal times.

This composition was supported by some catholic churches, monasteries and palaces in the background, and the top of everything on the hill was the Vittoriano, both literally and metaphorically. The monument is also known as the 'Altar of the Fatherland' (Altare della Patria), and it is really a huge and spectecular piece of architecture connected to the modern state of Italy. 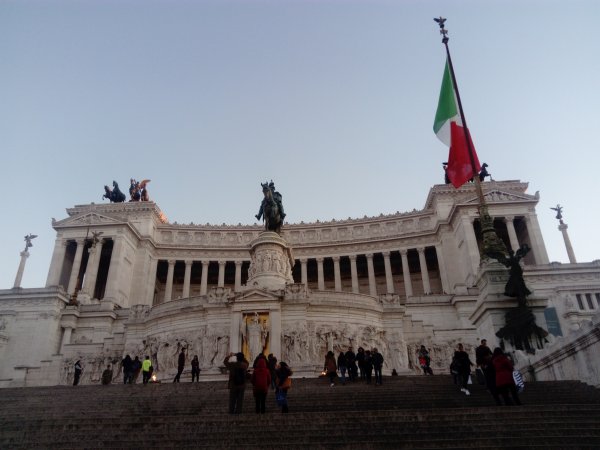 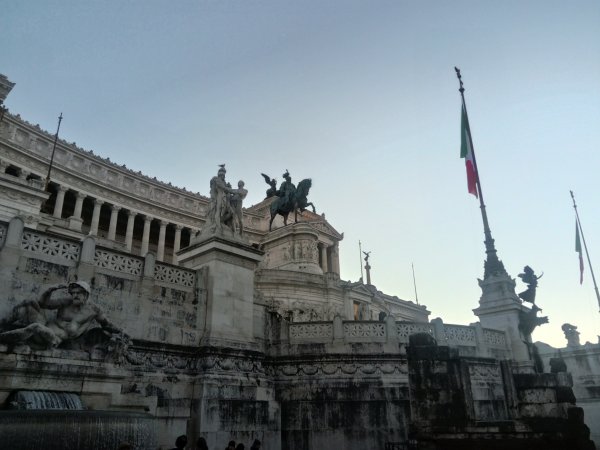 By the time I was walking there, I already realized that Rome was fortunately not the gigantic metropolis I was afraid of: most of the streets were surprisingly small, and many world famous sights were just hidden here and there, so although it was not such a labyrinth as the Venetian lagoons, it was a real treasure hunt to take my printed touristic map and try to find the monuments without phone navigation.

Every single place was extremely full of tourists, especially around La Fontana di Trevi, the famous fountain that has the superstition that if you both throw a coin in the pool and drink from its water, you will return to the city. Well, I did it, and I returned there twice... Actually I can still do it due to my imagination anytime. 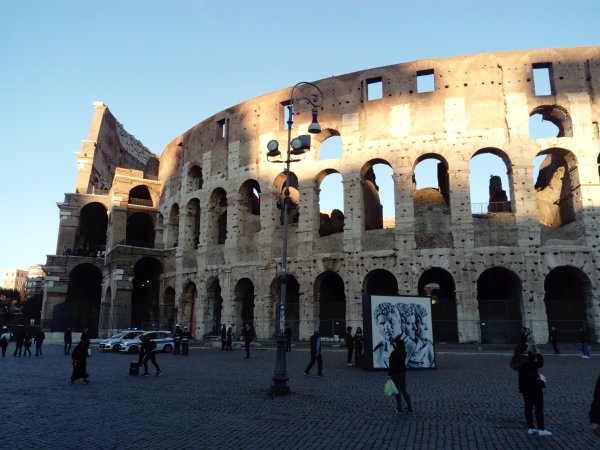 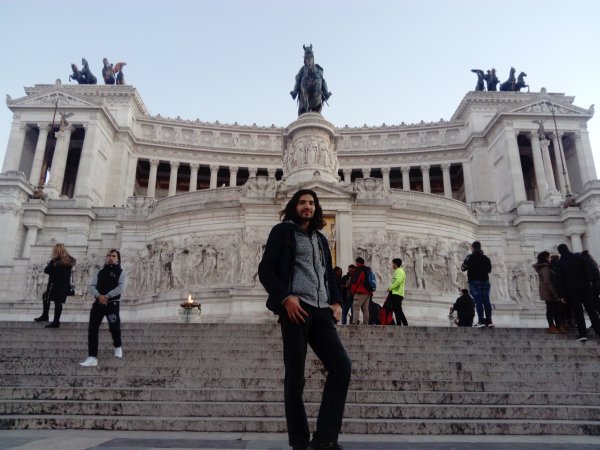 I rather preferred my discoveries along the main corso, which is also named after Vittorio Emmanuele II, the first king of the united Italy, who has a huge authority in the national myth of the country, just as his prime minister, who also has a road with his name nowadays: Via Cavour.

By the way, as it turned out, the king himself is buried in Pantheon, the famous ancient Roman temple that was turned into a Christian church, and just as many buildings from the ancient times, it survived many conflicts in history to remain an icon of Rome. As I was trying to put together the puzzle pieces of my trip, I also learnt that I was close to Piazza Navona, where you can find the Fountain of the Four Rivers: the allegories of Nile, Danube, Ganges and La Plata, who also represent four continents of the globe. 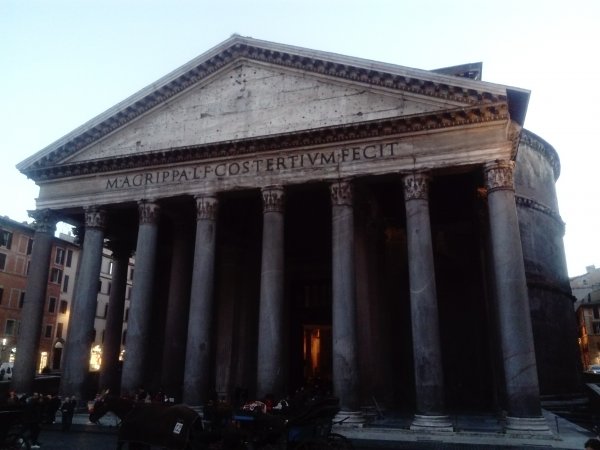 I had read many historical books related to Italian cities, especially by Hungarian author László Passuth, who had a very precise knowledge, accurate vocabulary and vivid imagination to describe the medieval and colonial times of these lands. Walking and seeing the finest collection of baroque, classicist and Renaissance art in the capital of Catholicism was a huge spiritual and aesthetical journey indeed, just as if his words had become real.

At this point I must mention Vatican city with the Angel Castle (Castel Sant’Angelo) and obviously St. Peter’s Basilica (San Pietro), which made me feel that I saw a much more elegant, massive, decorative and monumental version of the basilica in my birth city, Esztergom. 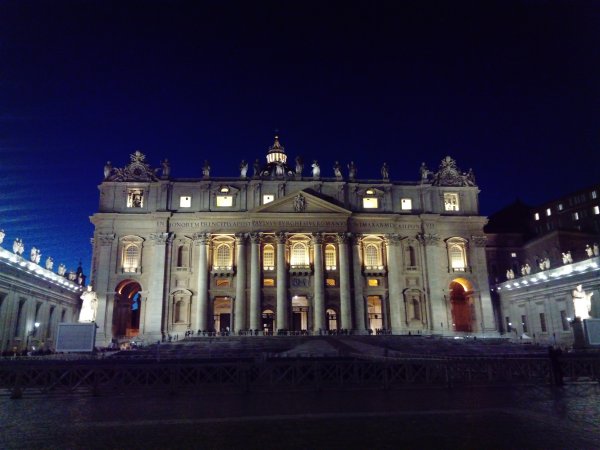 However, San Pietro’s measures cannot simply be compared to anything. Especially not the ones of the square in the front, which was equally celestial and infinite with the crowd of pilgrims and tourists in the late autumn afternoon and as being a vacant place in the darkness just a little bit before Christmas.

Unfortunately I did not have a chance to enter and see the rich exhibition of the Vatican Museums and check out Michalengelo’s masterpiece, the Last Judgement in Sistine Chapel - yet  I guess walking around the charming bridges of Tevere, looking around in the park of Villa Borghese and going down the Spanish Steps without any rush helped me to explore my own Rome. To be honest, most of my photos from there are lost, but I could not have a better camera for sure than my eyes anyway. 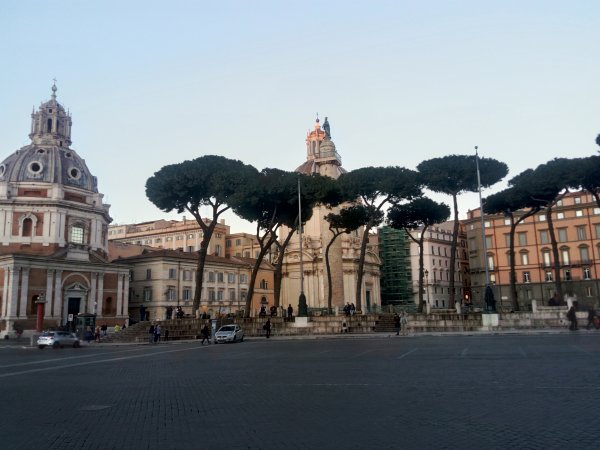 By the way, the resident Hungarian reference is obligatory to be summoned here: upon Gianicolo, the hill of Trastevere, apart from the most beautiful view of the city, I could also find the busts of Garibaldi’s soldiers, and István Türr was also among them with many others from my country who were fighting together with the Redshirts (camicie rosse) for the Italian independence.

If you have some additional time, you can bump into some more touristic attractions like the Mouth of Truth (La bocca della verita): the face of sea god Oceanus made of stone, which bites your hand according to the legend if you are a liar. 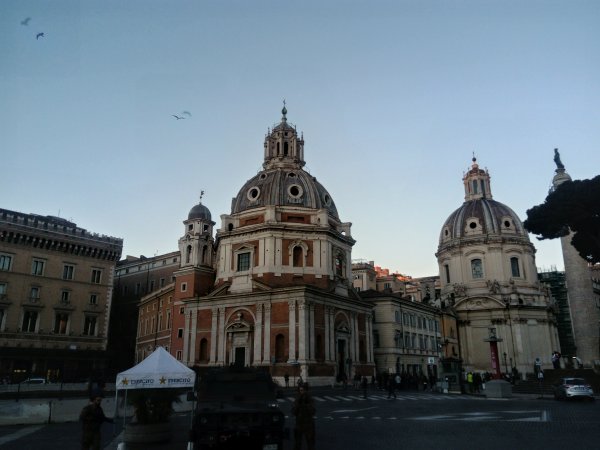 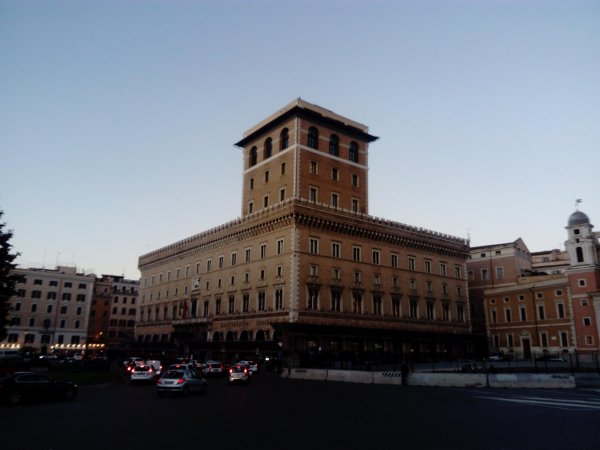 Based on my experience, it can take too much time to wait just for putting your hand inside his mouth, but you can even look at it from the queue in the outside, and if you want to get some comfort, the fortune teller machines reading from palm are usually designed based on this monument everywhere in Europe.

This city which remained in my heart has much different characteristics than the one you can find in the movies. I tried to find the authentic vibes instead of the plastic interpretations and souvenirs usually pictured in the media: I wanted to see the Rome, where the famous painter Caravaggio worked and hung out in inns (osteria) and tavernas, and the one where knights, mercenaries, artists, tradesmen and ancient Latin citizens were living their busy, fancy or loose everydays. 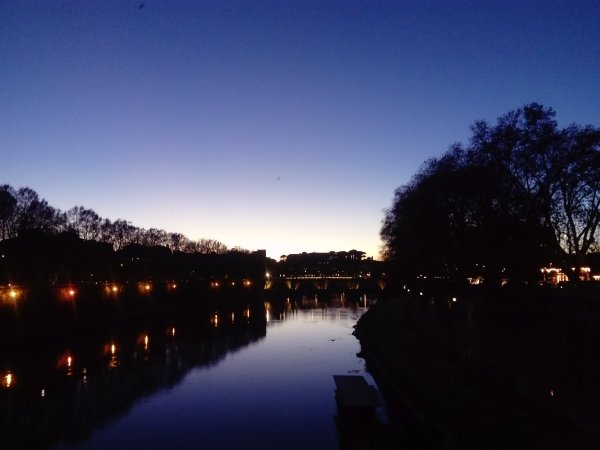 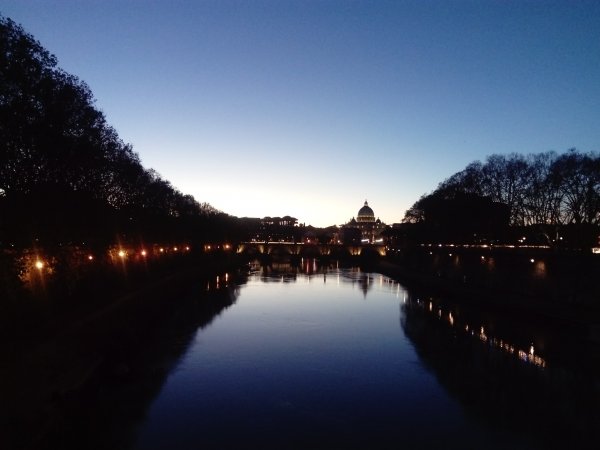 This project seemed to be successful, I have to admit, because the kind random chats with locals, the nice shops and bars at some corners and the remarkable dialect of the people of Lazio still encourage me until today to dare to challenge the unknown.

This trip was not just a physical road to me across the seven hills of Rome, from Capitoline to Palatine, or from the streets of Lateran to the stone lions of Piazza del Popolo. It was also an island of unexpected miracles coming from another universe. From a land that we somehow think we already know from our education and culture, but it cannot fully be understood without experiencing it with one’s own eyes.

Perhaps its whispering legends cannot be completely discovered at all, and this is the wonder of it, which stays with our changeable civilization through ages.