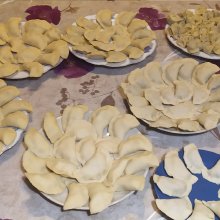 Since I started living abroad, I obviously had to become more independent, which includes a wide range of duties within everyday life. Some of them are still rather inconvenient musts for me. However, there are some other activities that surprisingly turned out to mean a lot of fun, so they had the honor of joining the special club of my hobbies: well, cooking is definitely one of them.

It all began in Italy (where else?), thus with one of the most important gastronomical cultures - I tried to prepare traditional Hungarian meals like pörkölt (Goulash) with the available ingredients, while I was also preparing my first spaghetti al pomodoro i funghi (spaghetti in tomato sauce with mushroom) at that time, which I have improved quite a lot since then. 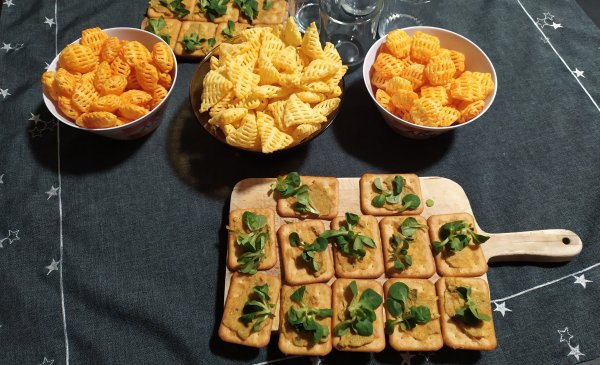 Having the opportunity of spending long months in Poland, knowing a Polish family in person and my natural curiosity towards other cultures, ‘stirred’ with the wish to extend my cooking horizons led to a very interesting cultural dish, namely my culinary journey in the Polish cuisine.

When I was staying in Czech Republic, I had already noticed many similarities to the Hungarian meals from the Fisherman's soup with carp to the broth, and although the ingredients used there were sometimes different, it was an interesting experience to see meals like langoš (lángos), guláš (gulyás) or trdelník (kürtőskalács), which will be disputed forever, whether it is from Moravia, Slovakia or Transylvania originally. 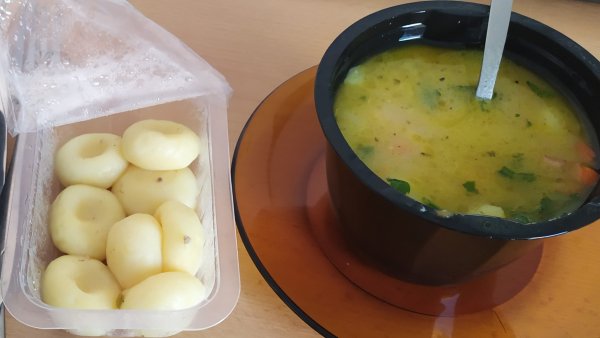 Well, these gastronomical interactions are also remarkable in the Polish-Hungarian relations, although the goods of the Polish dinner table are also influenced by Eastern-Europe and have many similarities to the Ukranian and Russian cuisine as well. If we have a look at the ingredients, they are mostly typical in every Slavic kitchen: first of all, onion, mushroom, beetroot, potato, cabbage and pickled cucumber are common ones, and an enormous amount of meat, in general including pork and beef, which brings Polish cuisine closer to its Hungarian sister, although it still uses less fat and oil.

Let’s start the list with the soups - not only due to the fact that the first course is usually a soup (in Polish: zupa), but also because the Poles seem to be huge fans of soups, and you can barely find a vegetable that cannot be the protagonist at least once in the story when it comes to some liquid starters. I have already mentioned barszcz, the spicy and delicious beetroot soup in my Christmas article, but cucumber (ogorkowa), tomato (pomidorowa), mushroom (pieczarkowa) and peas (grochowa) are also popular basic ingredients of typical soups. 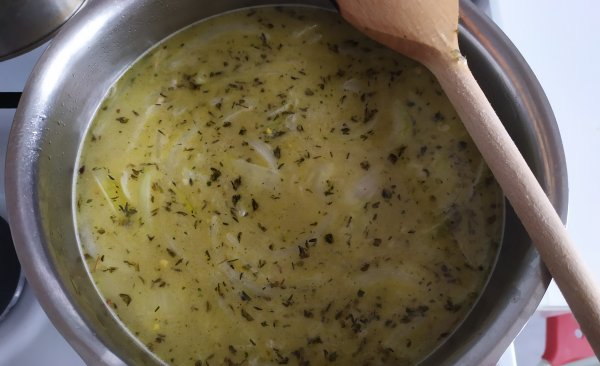 However, my all-time favourite is the onion soup (cebulowa), which requires certainly plenty of red onions, but the secret things making it indeed special and unforgettable are thyme (tymianek), pepper, butter and a little bit of white wine (preferably dry one).

Apart from vegetable soups one should try the rosół, the Polish chicken broth, which is not only the true equivalent of the Hungarian (tyúk)húsleves due to the way they are made or the noodles they use, but because they are both traditionally served on Sundays in these countries. Another great course is żurek: a thick, creamy soup with potatoes, bacon, sausage and sometimes eggs, which is always a very authentic and trustful option in Polish menus. 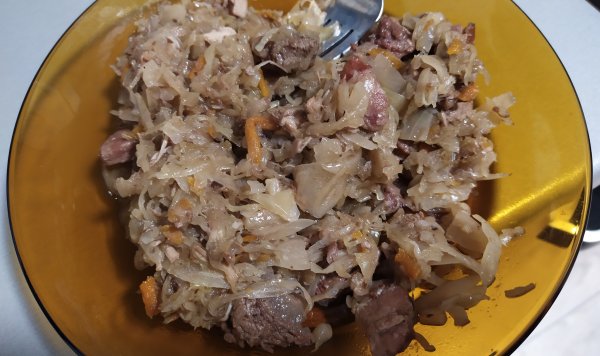 Now it is time to go ahead and explore the main dishes, first of all the one which might be the most famous national meal of Poland, bigos, which includes pork, beef or veal and cabbage, which is the real spirit of this food. Additionally it may contain sausage, bacon, tomato or mushroom, and although there are different theories where it exactly comes from, one thing is sure, that we know a very similar meal in Hungary by the name székelykáposzta (‘Szekler cabbage’).

Another important meal which is usually served on family occasions is gołąbki ('pigeons'), which means that there are pieces of cabbage stuffed with crushed meat, rice and sometimes mushroom as well. This meal, which is kind of international in Middle-Europe and the Balkans is very popular in Hungary and known as töltött káposzta (‘stuffed cabbage’). 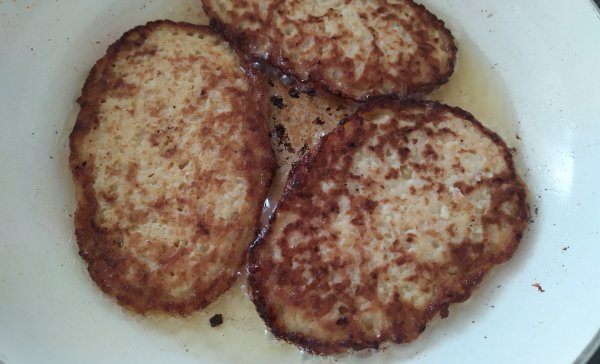 There are some excellent fried things one has to try if they have a chance to visit Poland for a while. First of all, we’ve got placki ziemniaczane (literally: ‘potato backs’), which is a tasty Polish version of the dish called bramborák in Czech and tócsni or rösti in Hungarian. Basically the most essential ingredients needed are flour, oil and potatoes and it does not take a lot of time to prepare it, but to be honest, some talent is required for it. The name of hałuski might sound familiar for Czechs and Hungarians due to their meals halušky and galuska, while łazanki is an extremely satisfying dish is prepared with flat shaped pasta, sausage, meat, cabbage and bacon. 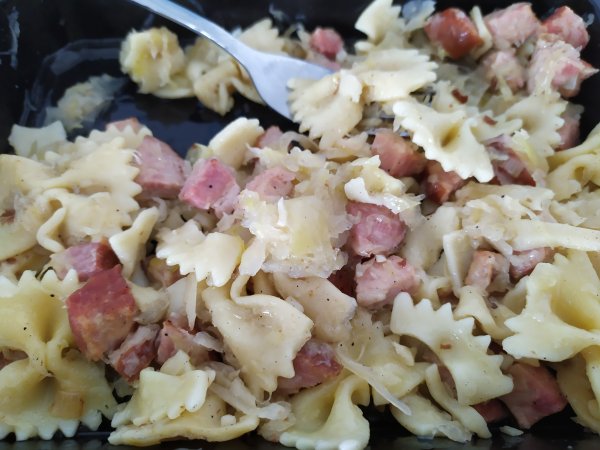 Then naleśniki, the Polish crepe should also be mentioned, which is a bit more universal and creative than the Hungarian palacsinta: although the dough is very similar in both cases, while we eat crepes as a sort of dessert with jam, cottage cheese or cocoa, the Poles can fill it with a lot of different stuff and they can be eaten as a main course; there are many restaurants specialized in naleśniki, so we can also consider it as a kind of street food. 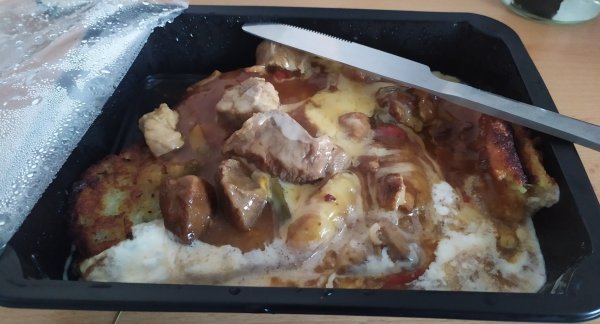 And here is the point where we can see another relevant cultural influence, because both of the fried things mentioned above can be served with a delicious Polish sauce called sos węgierski ('Hungarian sauce'), so if we can see the expression po węgiersku (‘in Hungarian’ or ‘Hungarian way’) after the name of a food in the menu, it usually means that it is prepared with this special sauce. 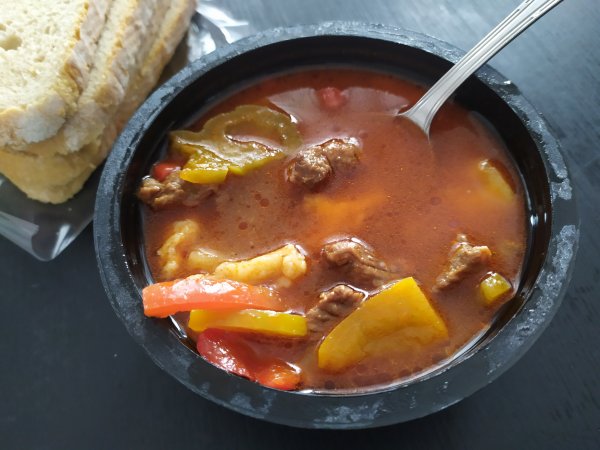 Although we do not really have this dressing, it obviously has something to do with my country, because spicy components like paprika indeed give us the impression that the food has a sort of ‘magyaros’ feeling, as we could translate the Polish phrase. Besides, there are more direct impacts from Hungary: one of them is our most famous meal, Goulash, which is called gulasz in Poland - the irony is the fact that saying gulyás in Hungarian rather refers to the soup version of the same food (gulyásleves), which also exists in Polish, but you can find it as bogracz, which name comes from our traditional outdoor pot for cooking, the bogrács. 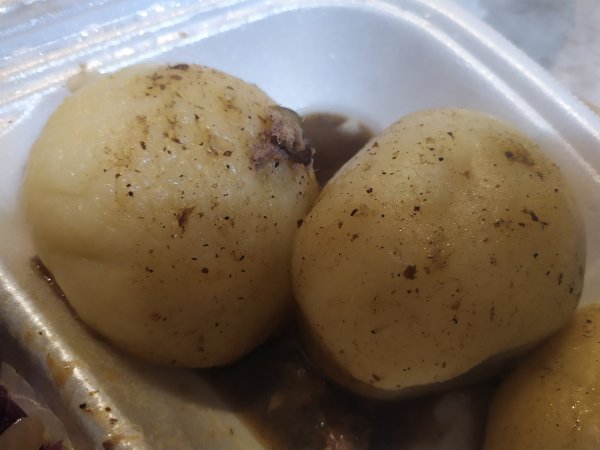 Moving on some further specialities, the Polish donuts, pączki can mean a real culinary pleasure with their dozens of different flavours - they are especially popular around the end of the carnival season on the notorious Fat Thursday, where there are a lot of discounts in the Polish restaurants as in many other countries. I have already written about pierogi related to the holidays, but there is something else which is more local: they are the kluski śląskie, the Silesian dumplings, which are small dough balls, maybe a little bit similar to the Czech ones.

These guys can be eaten as a side dish or main course depending on the way of preparation and the rest of the ingredients. If you are invited to a house party, you might have an encounter with some Polish snacks, which are a bit similar to Spanish tapas: they usually include pieces of cheese, olives, cucumber or even fish on sticks - a composition that we would call katonák (‘soldiers’) in Hungary, where we do not really have the same custom.

If you think that there is barely such a thing as Polish street food, you are entirely wrong: most probably it means that you have not tried zapiekanka yet, which is also sometimes called the ‘Polish pizza’. Well, after living at least for half a year in both countries I can surely see interesting similarities between Poles and Italians (mostly connected to habits), but this meal is a bit different.

Zapiekanka is a long piece of baguette with a lot of cheese, mushroom or sometimes even bacon, ham or salami, which is put in oven and served optionally with cucumbers/fried onion or a huge variety of sauces that mostly covers ketchup, mustard, mayonnaise, barbecue, but my personal favourites are the local ones: garlic (czesnekowy) and basil (bazilowy). If you are eager to taste something different than hamburgers and hot-dogs, while having the feeling of a home made sandwich, this choice is your perfect match. 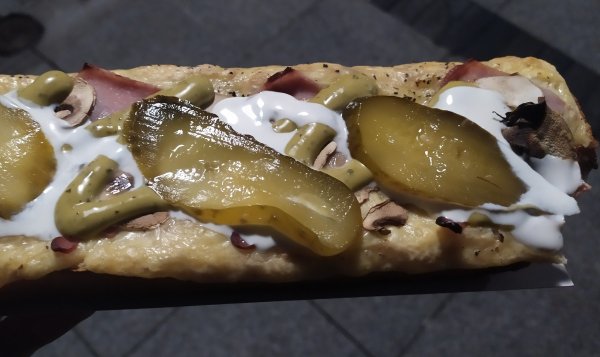 It is evident that it is not possible here to show the whole diversity of the Polish cuisine, which might be less-recognized or known than other gastro-traditions in Europe - we could certainly continue with some Polish sweets and cookies or other main courses such as biała kiełbasa (‘white sausage’) or smalec, the lard we also use in Hungary with bread for breakfast or dinner. To be honest I preferred to prepare this brief summary based on the meals that I had the opportunity personally to meet and try, while I was obviously looking for the cultural connection between the two nations as usual.

And apparently it makes sense: apart from the fact that I myself as a Hungarian could feel the tastes and smells of my homeland in an exotic context, the Poles I have met so far also praised the cuisine of my country, so loving fine (and huge) meals seems to be a common virtue of the two countries.