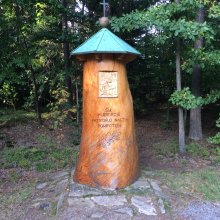 Tourism and traveling are mostly related to visiting cities, sights and monuments for most of us - or, for those who are more intellectual, traveling might include exploring the culture, the language and the customs as well.

However, sometimes we forget that finding our own unique ways to explore a new country is not just about very obvious objects on the surface, but it is also important to go deeper and get as wide overview on the context as it is possible. It might sound stereotypical that going to the nature is always a good point after the hustle and bustle of the city life, but this old wisdom still has a lot of truth within. 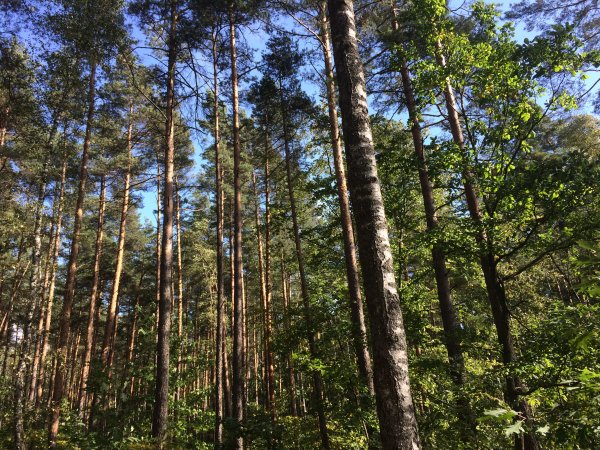 Meeting the countryside, the local and everyday vibes are inevitable to understand the mentality and the values of a distant world, and, if we are honest, it is true that we might find many similarities in general between one landscape to another or one architecture to another (even more if we focus on Eastern Europe), but it does not mean that there is nothing new in the air, we just have to learn how to see it. 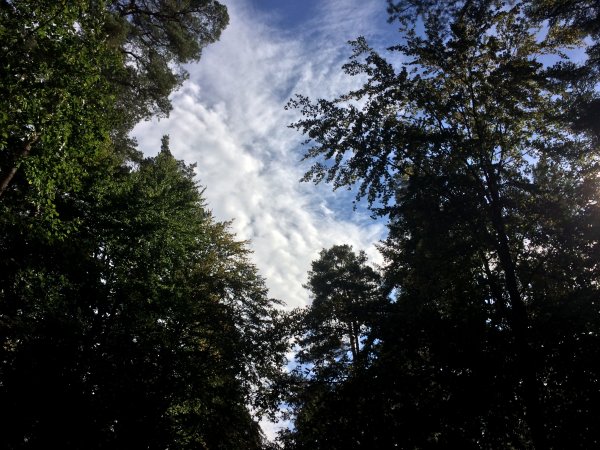 What is more, the biggest surprises usually come from the places where we do not expect them, and while the traditional trips can be the fields of education and cultural experiences, a journey to the wilderness is a great opportunity for our personal growth. It really teaches for example how to listen to others or even ourselves, and you will definitely learn how to appreciate the silence, if you open your mind and tend to remain patient to catch some wonders. 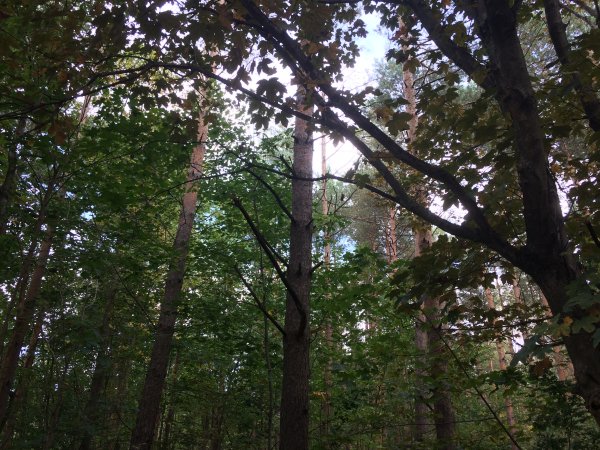 The Voivodeship Świętokrzyskie ('Holy Cross') is a less-known region of Poland for foreigners for sure, but it should not stop us from making it a relevant destination for our plans. Even though its capital, Kielce is not among the largest Polish cities, the intact beauty, inborn charm and vivid directness of such settlements really have something to do with the spirit of the country. 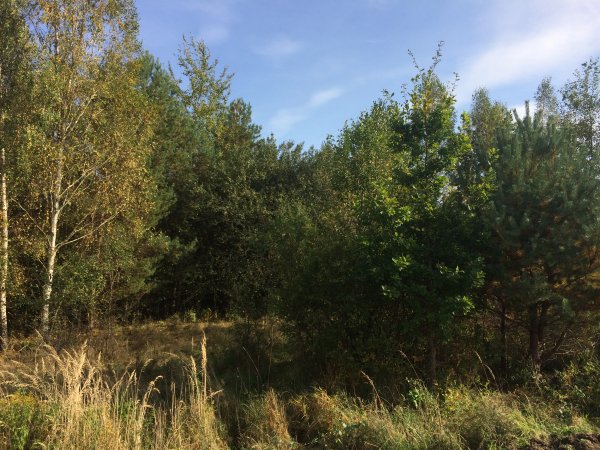 Lying exactly in the middle of the country, this place is the bridge between the East and the West of Poland (characterized by the Wrocław-Lublin axis), while the fact that these parts are rather rural than industrial, gives us a chance to feel a different perspective than the usual, not to mention that the landscapes seem to be extremely timeless, pulsing and powerful in one's eyes: this way the observers are just going to follow some kind of ancient beats and rhythms floating all around them. 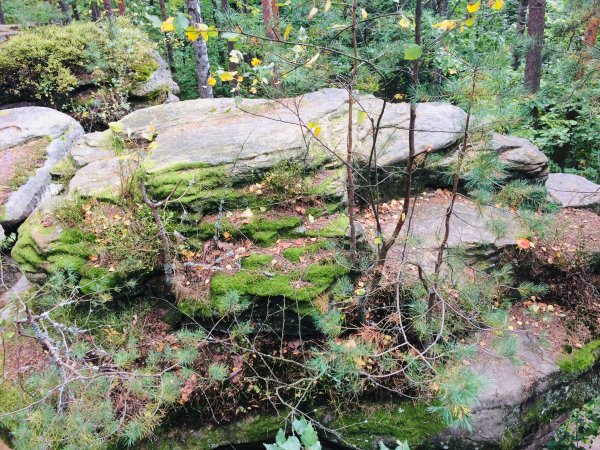 Another regional city, Skarżysko-Kamienna used to have a very significant role in the transportation of the country due to its central location, but it is still an important junction (especially in terms of railways), no matter if you travel from the South to the North, or from the West to the East. 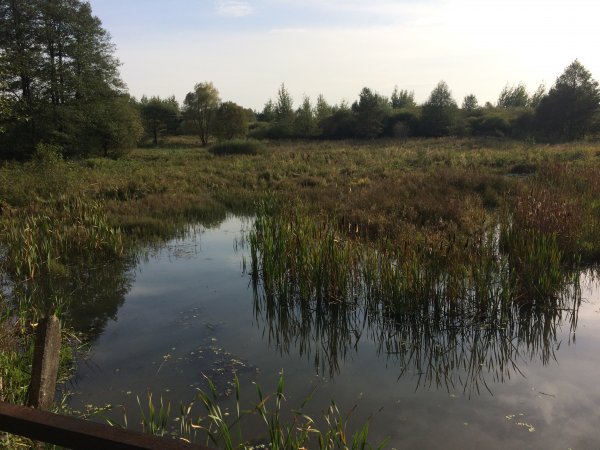 Both of these cities can be found on an imaginary border between the human world and the pure nature, that makes them indeed very fascinating, but if we go ahead and aim to look for something more original and outstanding than a simple sightseeing, we should visit some small boroughs (gmina) such as Bliżyn, a medium-sized village in this voivodeship, which is completely surrounded by the miracles of the wild. 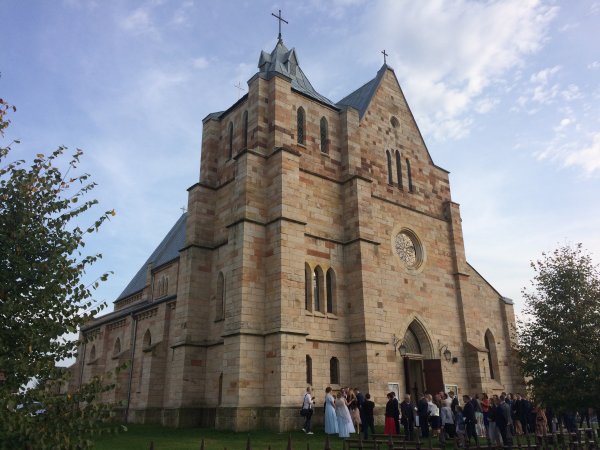 The magic of the village does not exactly come from its history, although we can talk about the impressive construction of the catholic church St. Louis (św. Ludwika), the castle of a late noble family (Zameczek) and the memory of king Władysław II Jagiełło, who stayed there for a night before the battle of Grunwald he won against the Teutonic Order. Another historical curiosity is that due to the large covered territories around the municipality, different groups of bandits, mobsters, rebels, then even partisans used the forests to find a shelter during the centuries. 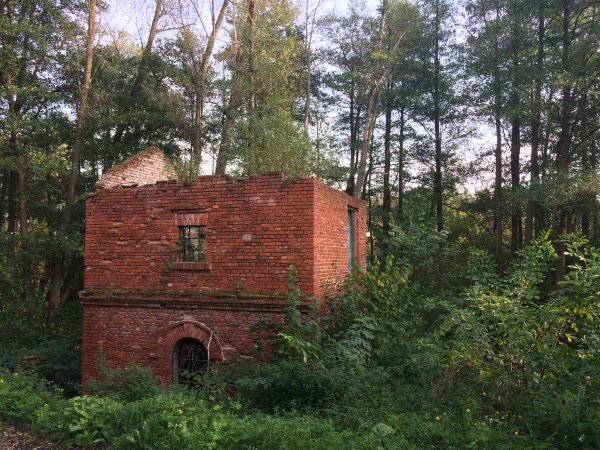 The last century also left its mark on the village, since there used to be a factory in the area that was later used as a labor camp of the Reich, while we can see the tombs, graves and statues of many different cultures crossing the region, like the German, the Jewish or the Soviet-Russian. Those who are interested in folklore and science may also bump into further interesting things: the first group will find a water mill to discover, and the rest can check the fossils, footprints and other remnants of dinosaurs excavated in the territory. 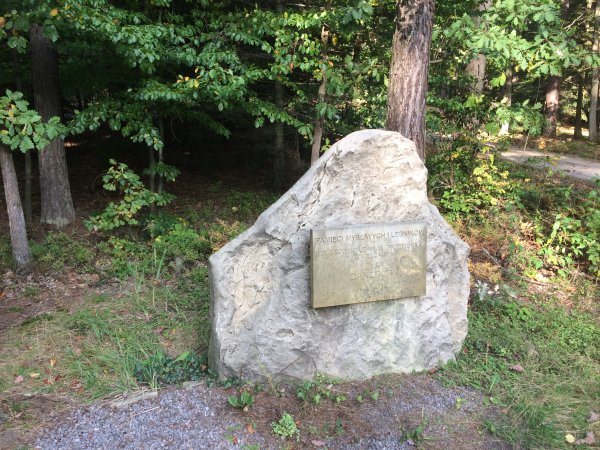 The real atmosphere what makes the place special though can be rather experienced in its natural inhabitances, since Bliżyn is entirely in the heart of forests mostly consisting of oaks, pine trees and spruce - it is a fun fact, that the last one on the list gained its English name because of this region, because it originally meant 'something from Prussia', due to the fact that this part of Poland used to belong to Prussia for ages. 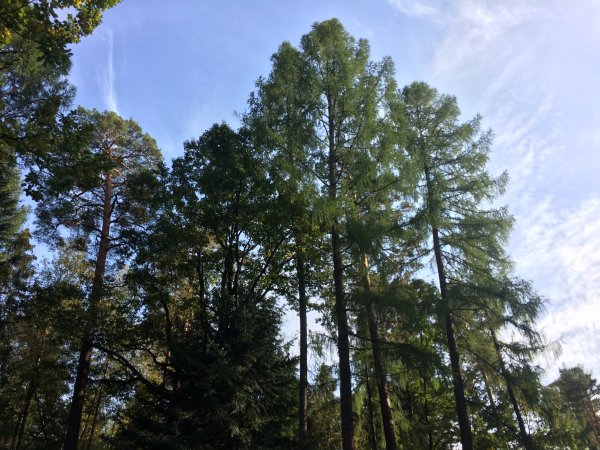 These trees, standing everywhere as spears or spikes from the ground, are not just important materials for the human society, but they can somehow embody the very typical Slavic spirit that we might imagine, if we think about mythology. These woods are really supernatural, so listening to the whispers of the wind and the speech of the branches is both a spiritual trip and a useful way to clear and refresh our minds: it is enough to take a huge breath and hear the eternal song of existence. 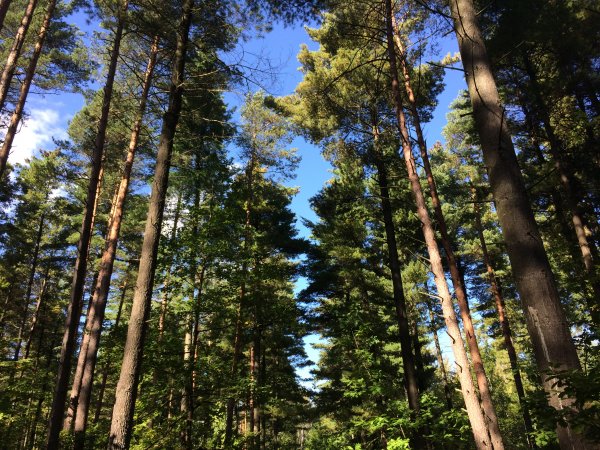 Walking among the green giants is not just a sort of meditation, but it is a journey in the middle of an open-space biology book or exhibition as well, since we can have a lot of encounters with different species: first of all insects, birds, reptiles and small mammals, but there are some wolves, wild boars and stags hiding in the depths of the forests too. 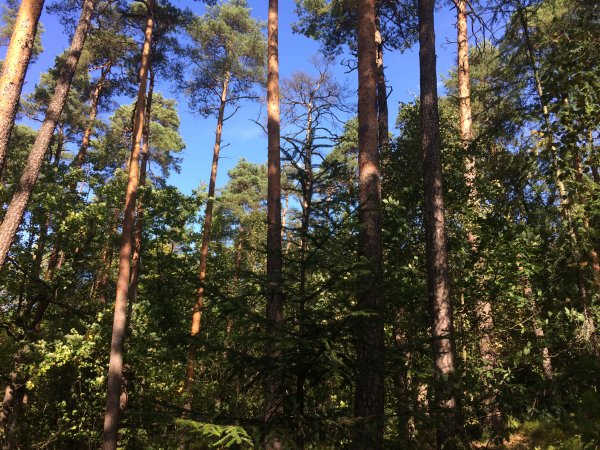 If we are mentioning the power of life, we should also remember the most famous, and one of the oldest oak trees in Poland, Dąb Bartek (Oak Bartek) who is more than six centuries old, starting growing in the early 14th century. The fact that it has survived the storm of history partly happened due to the fact that it used to stand on an island surrounded by swamps and rivers, so it was impossible for humans to approach it closely. It is both a cheerful and scary moment to look at the enermous measures of this Methuselah and think about that it was there before we had been born and it will probably stay there after we will be gone. 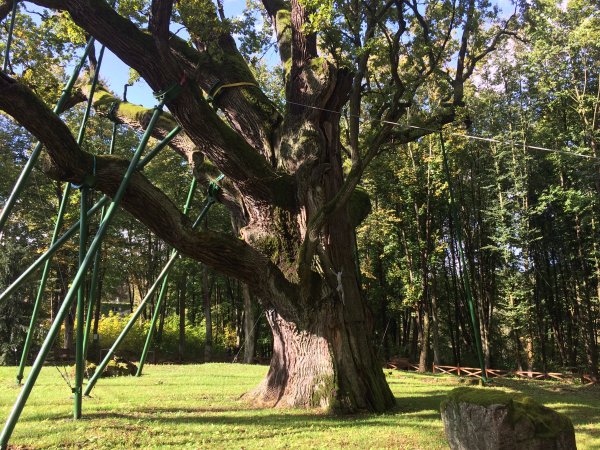 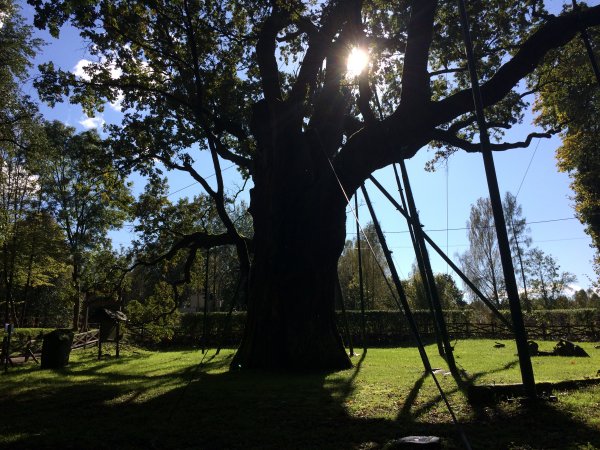 Apart from the creatures of the woods, the wonders of geology also makes our wandering more unearthly, monumental and eerie. Namely, there are a lot of ancient rocks among the pine trees - for instance, the most famous ones are at Skałki Piekło Dalejowskie ('Rocks of Hell'), which was given its name due to the fact that the magical and mysterious rocks reminded the local people to the mythical Gates of Hell. 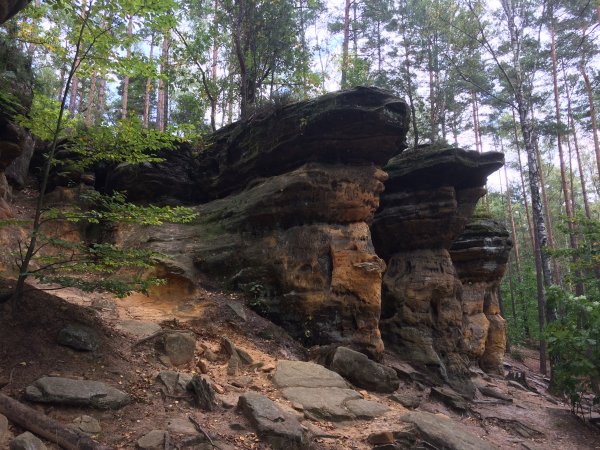 Even though it is quite obvious, that the extraordinary shapes of the area had a huge impact on the human fantasy, the truth is that the rocks mainly include sandstone and limestone from seas existing millions of years ago - if we take it into account, how many ages these forms and curves have witnessed, our amazement and respect towards the almighty nature will not change without the fairy tales either. 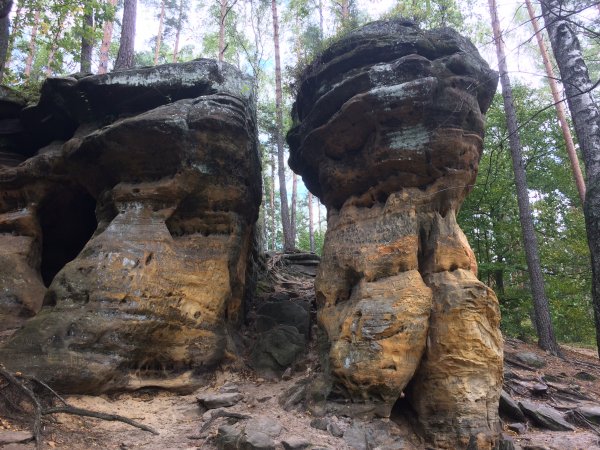 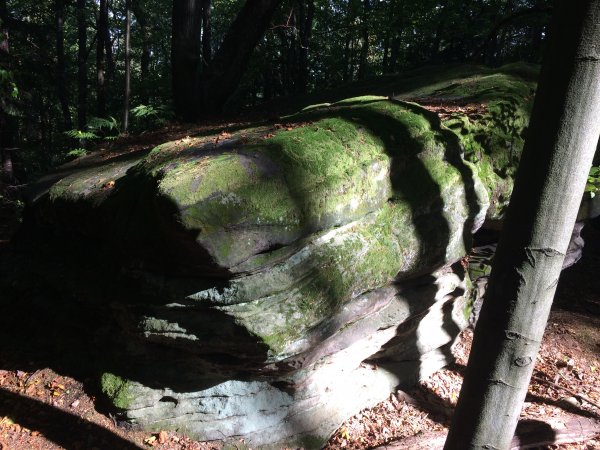 Hiking is one option though among many other outdoor activities, that we can enjoy in order to do some sports around the village. The long miles of bike- and asphalt roads also let us go for a bicycle trip with our family, friends or even alone, while swimming, fishing, jogging or working-out are practical and pleasant types of taking care of our bodies - especially around the artifitial lakes that the village owns. 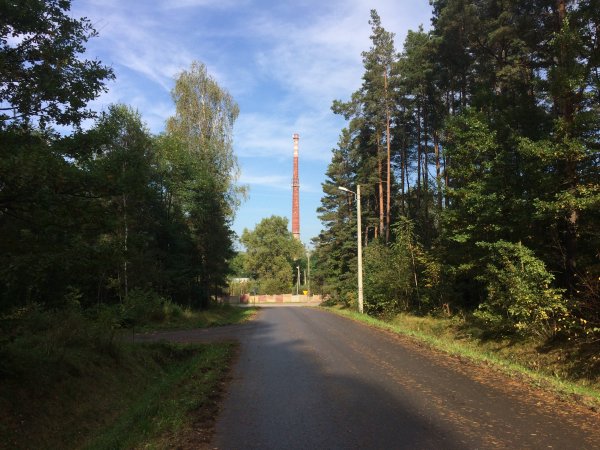 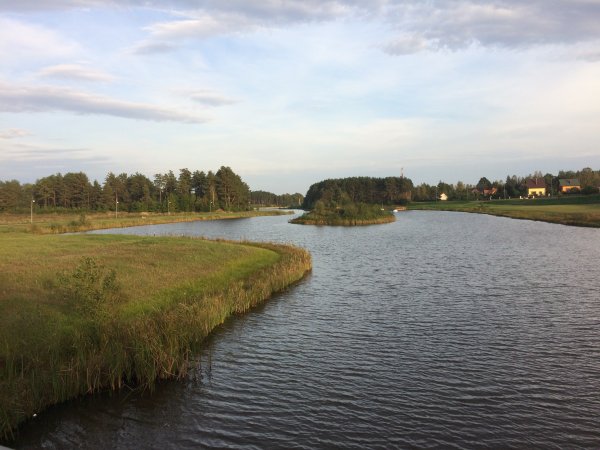 Finally, after the exhausting efforts and gorgeous discoveries of the day, the countryside also offers some alternative ways of socializing: a barbecue or cooking in the garden on open fire might be a great choice, particularly if we have the chance to do it with a special kind of Polish pot (garnek) that keeps everything warm and delicious - it is just up to our creativity, what to put inside. 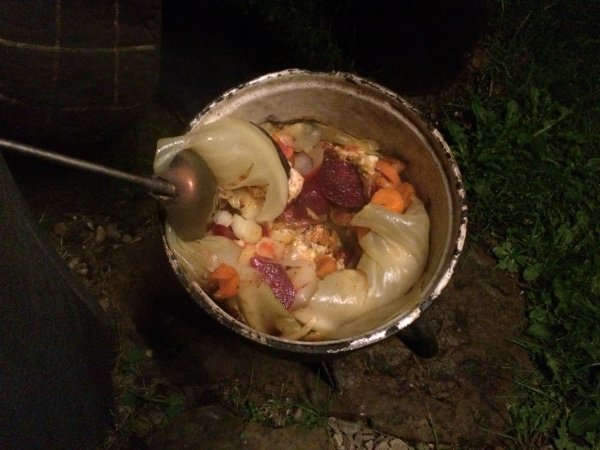 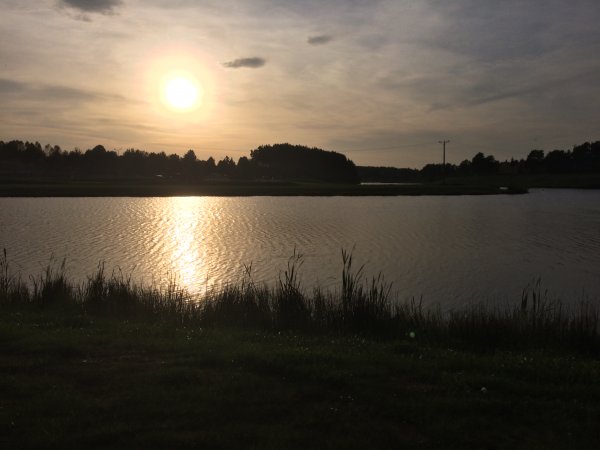