Ocsovai Ferenc
With Salesians in Silesia
Activities and workshops in the centre
Tartalom értékelése (2 vélemény alapján): 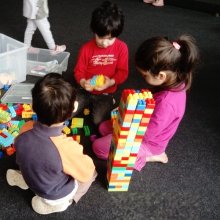 I have already written a lot about the city, the culture, the atmosphere and my relationship with my collegues and the children as well, but I have not summarized yet what exactly I do here. What does it mean to be a volunteer in a leisure centre, what is my schedule like, what are my duties, how should we imagine an avarage day of mine in Don Bosco? After having gathered many different impressions and experiences during the months I think I can see my daily activities quite clearly and the time has come to give a brief presentation of my job, which is obviously the most relevant part of my program.

The Mondays are usually longer than the others since I have a special activity in the morning called Oratory on the streets, but we usually refer to this program as Soiva due to the fact that this is the name of the place we usually go. The concept is pretty similar all the time: we take the car and have a group of three or four, then we go to the suburbs of Ostrava to a building which is full of socially exluded families and children. Don Bosco has a flat there that works as an oratory room to organize programs for small kids, teenagers, and even for adults of the place. 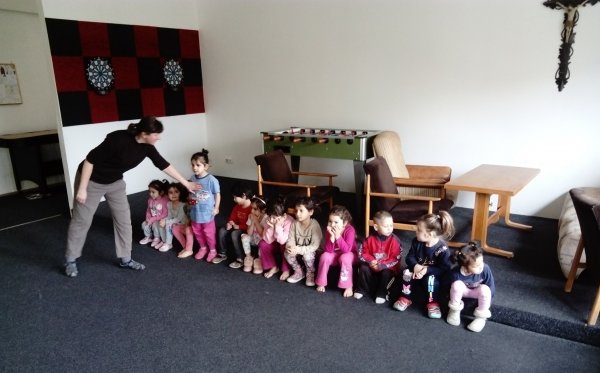 The first task of the crew is to collect the children from the families who are supposed to come to us on the actualy day in order to have our little 'Kindergarten class', and in the meantime we have to prepare the toys: puppets, dolls, plush animals, plastic and wooden cubes, sponges and so on. Then we have an oratory time when we let the children play, and in the end we take away all the things together.

Apart from the toys it is always very interesting that the children can always find alternative ways to have fun: they ask us to turn them around or to chase them, and they always find a way to make everyone involved in their joy - and this kind of natural and inborn love is such a gift for us that it just makes us more certain about that we should support them somehow and our job is valuable with valuable outcomes. 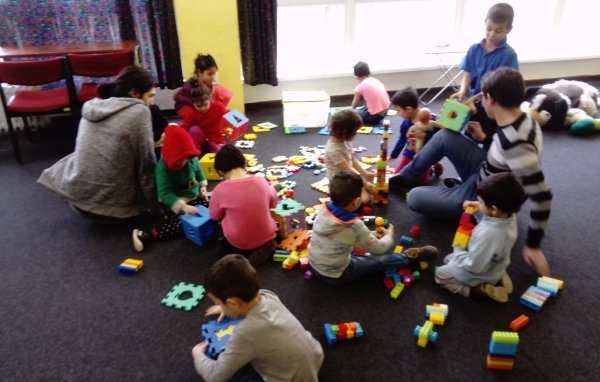 After we have finished playing we usually have some time to play group games together in a circle with some little songs and this is the time when I may play the guitar sometimes for the children. Then we have an education time: a small lesson or presentation about something useful, for example how to help your friends, wash your hands or avoid sicknesses. We often have a frame story as well with some cute little puppets - Adamek and his companion, Tomášek are very popular among them for instance.

The last seccion means that we work in small groups and each teacher has a couple of kids to do some small skillfull activities with, such as drawing, coloring pictures, ceramics or taking and lifting little objects, and sometimes there is a topic to discuss as well so the groups also give a chance for the smallest ones to learn. 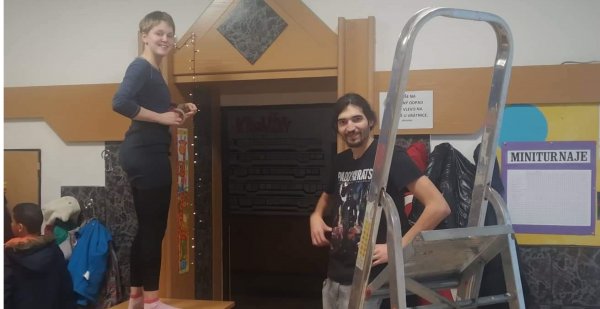 In general I have to work during the afternoons, and the structure of the schedule that the centre follows means that we have different workshops, and each of them is taken by one of the employees working there. We also have the opportunity to be responsible for our own workshops, but because of the communicational issues it might be more difficult for us -  this way a volunteer's task first of all is to participate in the programs, assist the leader of the activity and contribute somehow.

Just as the kids, we are also free to choose what kind of workshops we would like to attend, and there are many opportunities: the scale includes many areas from dancing and cooking to football, painting and handcrafting for example.

My choice for Monday is cycling, which always makes an extra responsibility because of the dangerous situations that might appear, but in general everything is very safe and we have all the necessary equipment to reach this goal, such as the helmets or the lights. The first hour is usually about discussing the traffic rules with the small children, then we go out to the yard with them, and they can ride the bike (or the roller, the go-kart) around the soccer field.

The second workshops is a bit trickier, because we take the older kids who are more attentive and responsible and we go out to the city, and if it is possible, we have a stop by a playground or a park to have a little break there before returning to the centre. 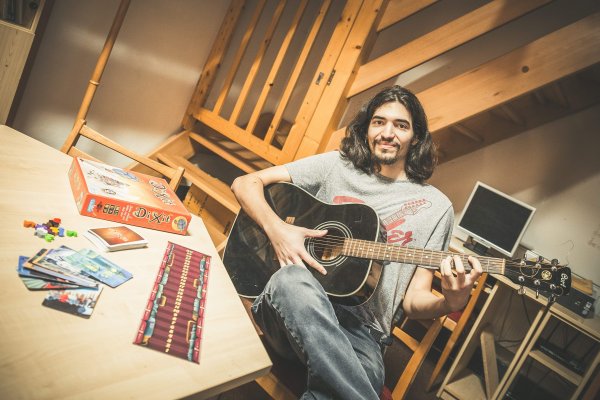 Tuesday is basically about board games, because both of my workshops are the same, the only difference is the fact that I have a different college to do it with. It does not matter if we have a huge group of kids or just two of them, or if we are in the bar or in the školka, we always find a suitable game that fits to the number and the characters of the participants.

Since I had not played any of such games for a long time before this work and I had been only aware of the very basic ones, I was very surprised what kind of creativy and diversity these games had: they are mostly full of strategy and fantasy, and the main concept beyond is usually very easy to understand - unlike the playing process itself, because sometimes it is indeed very challenging even for an adult.

Besides the simple fun the games can bring to us it is also an important point that since I spend time and have interaction only with a few kids, I have more chances to have personal ties with them which definitely makes everything easier. I also have to mention that palying board games is also a good point by learning a language, because they use a very similar vocabulary, and the non-verbal communication is very significant by them too. 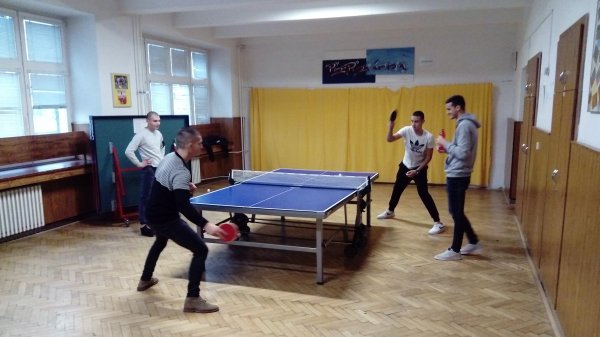 This statement about learning languages by simple instructions can be also true about sports: namely, the only one physical activity I have takes place on the following day, and it is the floorball, which is almost as popualr in Czechia as the ice hockey, so the children are just crazy about it, and there is no doubt that they are very talented at it.

In the beginning I had some concerns because I had never been good at sports back in school, but as it turned out I could learn quite quickly and I could get the feeling of success many times that I had never had before, while I have to admit that running from a point to another one and trying to be everywhere in the same time can be really exhausting (but healthy) sometimes.

Thursdays are very special as well, since they are the so-called VIP days, due to the fact that only the most hardworking, well-behaved and interested kids can attend the programs. The first big difference is the fact that we have a half an hour long activity, the Jekhetane, that means that we gather in one of the rooms or outside the building to play a huge game together. 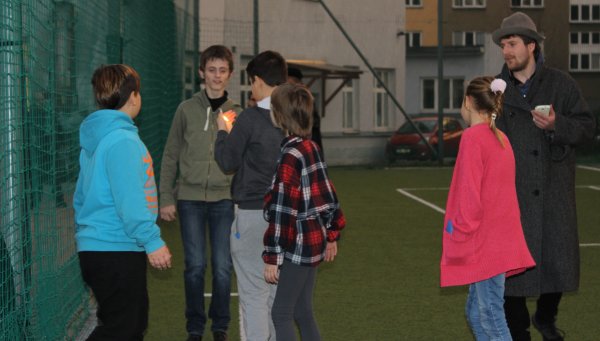 Sometimes they are individual, sometimes we play in different groups against each other, and mostly the concept is based on popular and famous games for children, but there is a place for improvisation as well. This was the program that also let me the chance a couple of days ago to make a short and interactive presentation about my home country.

The next workshop for me is the schola, the music workshop I mentioned in my previous article, then we have the holy mess, where I am having more and more opportunities recently to perform on the guitar. The last scene of the schedule is to have some snacks, sandwiches, and hot tea together in the bar, so we organize an informal dinner for chatting and spending time with each other.

Although there are no two days which are the same, it is even truer if we talk about the Fridays, because I have a double movie workshop, that could always come up with a new concept for the kids so far. In the beginning we did brainstormings about possible movie genres and wrote scenarios, then we took some tools and customes and set short videoclips together according to our plans. 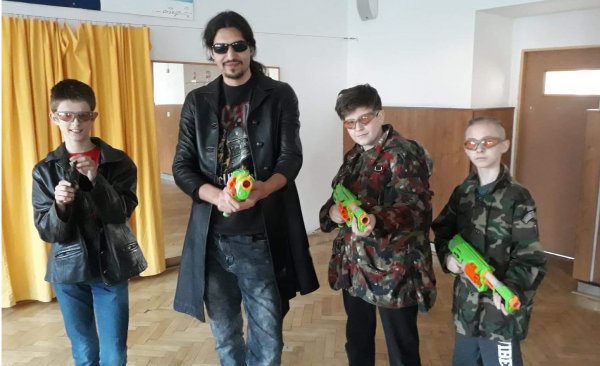 The next step was cutting the clips we had made to teach the children how to create their own movies with different softwares and applications. Later we tried a special type of art which is so popular in Czech Republic, namely the dubbing, and we also edited short trailers for imaginary cinemas for kids. Besides making the whole program direct and fun, it is also important to make the participants feel that they have learnt and made something by themselves, and we do pay attention for the details: how to add effects, music, subtitles, how to change the sound or split and arrange the order of the certain scenes.

I also have to mention the other tasks we usually have to do everyday: one of them is the doučovaní, so the tutoring, when the children can ask for any of the employees including us for some help related to the school and their studies. They can learn or practice something on an informal way: it can be maths. reading, writing, Czech or any other languages. Then we have the first oratory (oratoř), which is a short period that lets the kids buy things in the bar by real Czech crowns or zeferins, which is the fictional money of the centre to teach the children how the market works. 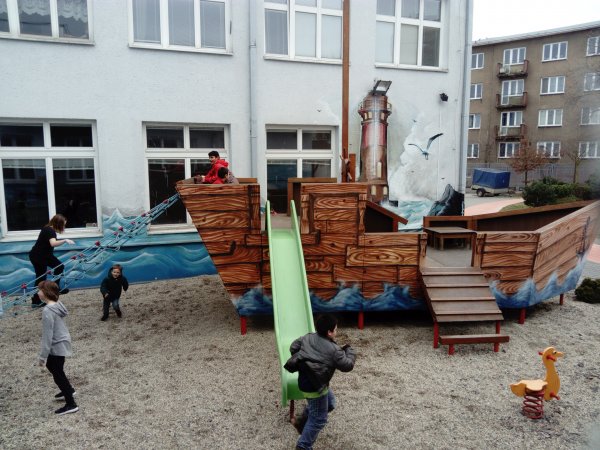 This is the time when the kids can play whatever day want: board games in the bar, table soccer, table tennis, pool, ice hockey, floorball, frisbee and many other things, or, in case of a good weather they can also go to the yard where we have a football field and a huge ship that they especially love. In the end of the day, after the workshops we usually have a short discussion, the slůvko to teach something important about life and human relations to the participants.

It usually has a different performer and approach, but it is connected to actual events or holidays very often, and we also have a frame story for the topics, which is The Little Prince (Malý princ) by Saint-Exupéry this year. Then there is a little bit of time to have an oratory again according to the main ideas, goals and spirit of San Giovanni Don Bosco.