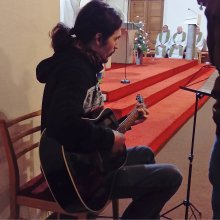 Playing the guitar has alwasy been a very important part of my life, since I started it at my age of sixteen. The fact that I began it quite late and reached everything almost completely on my own made my relationship to playing music a huge symbol, that still means to me that if you really want to do something (and if you are stubborn enough as I was), the only person who can stop you is more or less yourself - all the other things are excuses, as the ones I had been fighting with before I finally had the courage to grab a guitar and start the whole thing.

When I began my volunteering here, it also meant that I should probably suspend my hopes and dreams for a while to become a real and a professional musician, because I knew that it would be very difficult to find a new band as a foreigner even though I am staying here for a long time that could certainly make this possible.

This way I had the feeling that the only thing I could do would be to find some people to jam together with sometimes, go to some concerts and practice alone as I had always done. I figured out very early, that there were some opportunites to deal with music at my workplace in Don Bosco, but since my original genre is very diffent from the Christian songs we have and my level of Czech is not satisfying to teach anyone, I thought that it would not be for me. 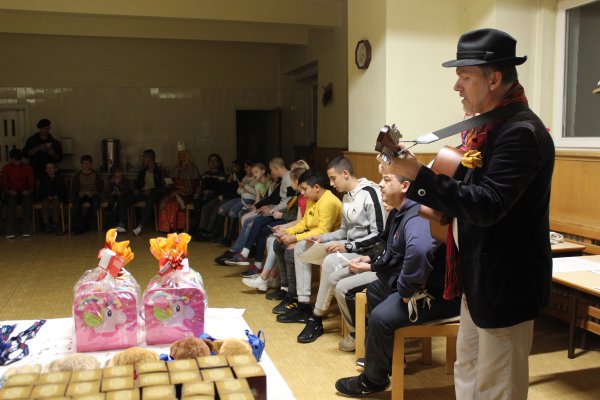 Then it has turned out that the long path of becoming a musician is not only something that belongs to material components, but there is much more deeply beyond, and I still need more time to understand its entire nature. As I experienced it within a few weeks, the Salesian centre is not only full of the spirit of love and fun, but it is also full of the spirit of music, and there are many different activites where we can meet that.

First of all, during the week, we always have a couple of days when we go to the church for a few minutes before the oratory, and we usually spend the time by singing a special song that is always very likely to appear in the holy mass. Apart from that, the kids can also choose a guitar workshop and there is another activity in the rehearsal room for the seniors, but I could not really join to those activites because of my lack of Czech communication skills. 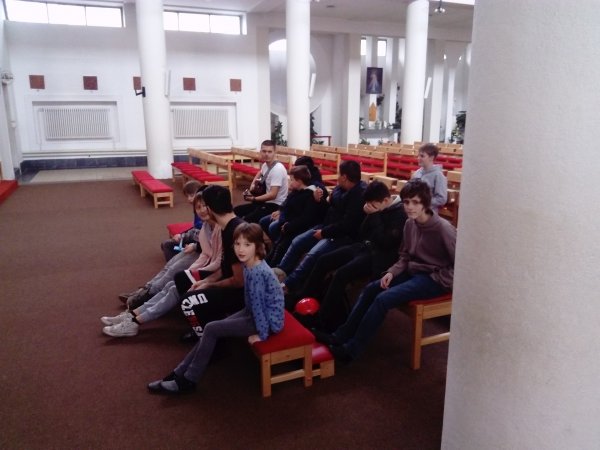 Another area to meet the music during my work (and this is probably the most important one) is the special mass itself on Thursdays that we have with the children together. Since the schedule is also related to it, there is a VIP workshop before the mass which is called schola, which means that the participants practice some chosen songs together that we will sing afterwards.

I used to have a lot of terrible experiences with music lessons in the past when I was a child, so when I tried it for the first time because of my curiosity, I was not sure that I could find my place there, but when I felt the whole atmosphere that we created by our songs, it just picked my soul up and put me into a new and magical world that I had not met for a very long time.

I have never been really comfortable with singing aloud or in front of others, but since the common spirit and the happiness are the only things that matter by us, I became brave enough very fast to make my voice a part of the actual moment. In general nothing is an obligatory within our job as volunteers, but both of us decided to join to this choir workshop and the ceremony as well, and one of the main reasons is this power of music that floats and flies arond us everywhere for a couple of hours every time we do it together. 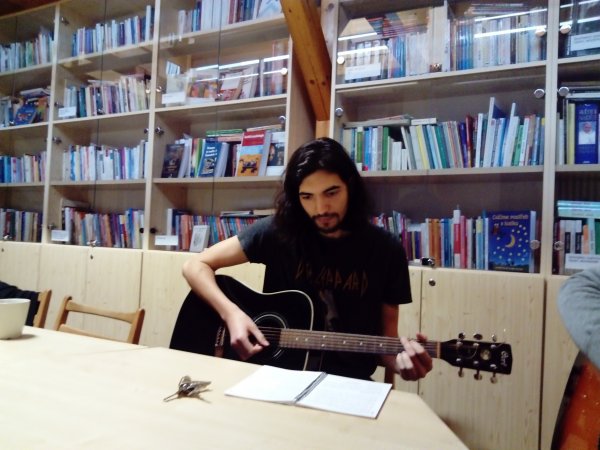 Namely the Don Bosco centre has a unique type of mass that is called as ’beat mass’ because of its revolutionary, extraordinary, but very simple way of thinking in terms of music and contacting God. This means that the traditional instruments of a catholic mass (such as the organ) are mostly missing, or they do not play a remarkable role at all, while the acoustic guitar and some basic percussion instruments are much more important, and sometimes there are also some other special supports like the flute or the keyboards.

I also have to mention that since I am understanding more and more of the language, I have explored that the text of the Catholic liturgy is literally the same everywhere all around the world, which is not that brand new discovery of course, but this kind of universalism was indeed exciting for me when I met it for the first time in practice. The songs themselves are not the very classical ones either - even the tradtitional parts of the mass (Kyrie Eleison, Sanctus, Agnus Dei) are modern, cheerful, dinamic, and they are full of life, joy, innocence, motivation, peace and emotions. 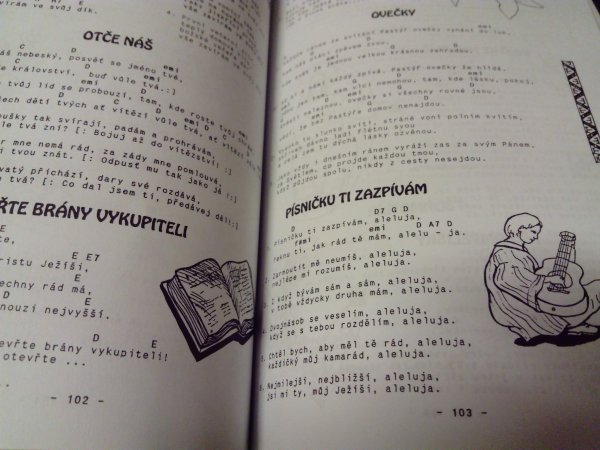 Many of the songs that we learn and sing from dozens of different books (not to mention the occasional ones) gives us the impression of a folk, a country or a medieval song, and they almost all sound very familiar and this way create an interesting 'musical déjà vu' with their smooth tones and catchy rhytms, even if we have not known them before. By the way, these pieces are also useful by learning Czech like all the songs in general, because the lyrics are sometimes simple to understand (but not always to pronounce) and we even receive some help by the translation in order to get more of the feeling.

It is always a pleasure to discover something new during the schola, because we can see the enthusiasm and the passion on the kids’ faces, and we can also greet the known songs as old friends, while the time when we practice can somehow change everyone a little bit to show their very bests. Of course, the top of everything is the ceremony itself, because doing the same but on a different way in front of (and together with) an audiance is like realizing the sketch on the canvas that the paintor has. 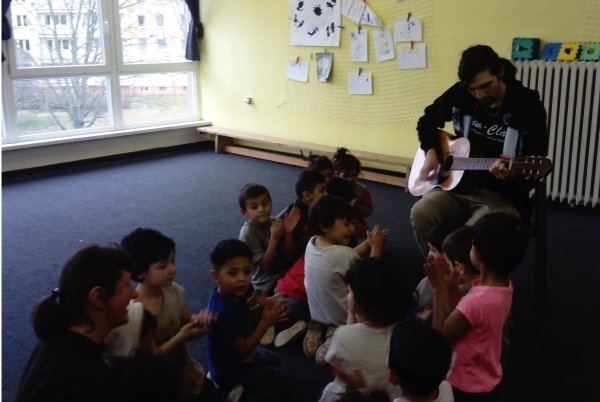 After a while these activities woke up my inner ambitions and I had the idea to try to get involved somehow, even though I was not completely confident in the beginning. Apart from testing myself I had also been missing the experience of performing and playing with others, and these events were telling me all the time that there must be a way to join, while I was also curious about learning the chords and the technique of the melodies.

Fortunately I could find helpful hands very quickly, because both of the leaders of the workshop (whom I really respect and consider as very inspiring, talented, open-minded musicians) were very cooperative, so slowly but surely I could get into this new world and have an active role in it.

The first step was to ask for some special guitar lessons to learn some song for the small children for the so-called Soiva, which is the oratory on the streets program we have once a week. This way I could get used to this different style and by time I asked for learning the kind of pieces that we have during the mass. After a couple of months I finally had the opportunity to join to our tutors for a song in the church, and that was a wonderful and unforgettable moment for me - even more because since then I have more chance to contribute to the choir workshop on the guitar. 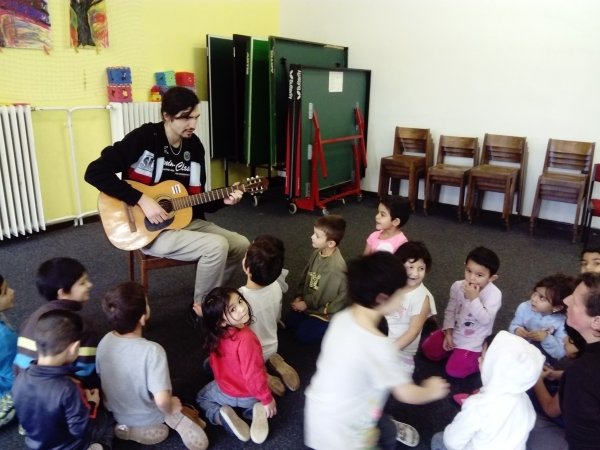 As a result I have found a new mission in Don Bosco that totally fits to my profile and my everydays, so I can do something useful, while in the same time I can keep on and deal with my passion on an alternative way that makes me a more creative and progressive person, as far as I can see it. Performing in front of people more often again is also giving me more courage and confidence for me recently: I dare to join, improvise, and even accept the fact that I might have some mistakes sometimes. There is another thing which cannot be doubted, and it is namely the indirect communication during the time we practice and play the songs, which really shows all the time to me how international the language of music indeed is.

What is more, I have gained another fantastic experience recently, because we had to change the usual program during the last Soiva, so apart from singing with the kids together as we always do, I also had the chance to improvise on the guitar, and I was trying to mix up somehow my own music style and the acoustic elements we use in the church.

The reaction was unbelievable: the children were clapping, making drumbeats with their hands on the floor, and they enjoyed my random performance so much, that we all were totally impressed. That little thing touched my heart even more, because now I am having a phase in my life when sometimes I feel that I will never reach anything great or important by my music, but unexpected situations like that can always bring me some hope back to continue. 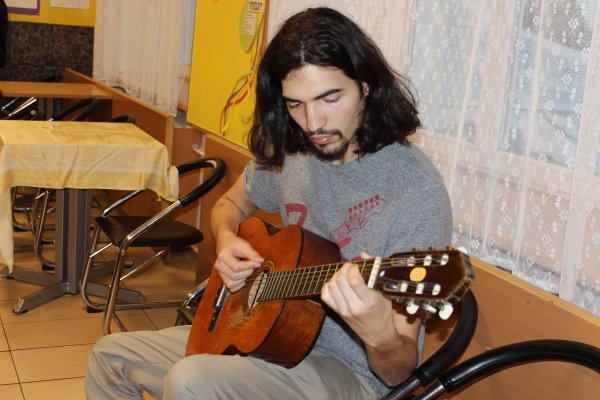 By now it is quite usual that the collegues can see me practicing during the lunch breaks in the bar, or the children can find me sitting somewhere and playing when we have the oratory time - and the best is the fact that I can look at it not as a selfish hobby but as giving something spontaneous to the others. Since I am a sort of composer as well, I have recently been writing more lyrical, sensitive, intimate and acoustic pieces, and it is definetely the influence of my church experiences and my life as a volunteer here in Ostrava.

There is a last fun fact, that sometimes comes to my mind, and it always asks me the same old question about destiny and coincidences. I started learning to play on my father’s old instrument, that actually comes from the former Czechoslovakia, and he also used to play similar songs in similar Christian celebrations as I am doing now, and even though nothing has happened on purpose, this story has given me somehow an additional confirmation that I might be on the right path by being here, surrounded by all these amazing miracles.